If you are baffled by Liberals who see racism everywhere, check out this cartoon that made the University of Alabama issue an apology. 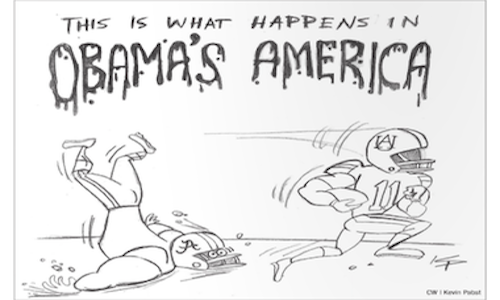 As I see it, the University of Alabama is saying that the world is upside down when Auburn beats Alabama. Contrary to what my friend and Auburn alum, Allen West, likely believed, few people expected Auburn to beat #1 Alabama. I know I didn’t.

I didn’t expect Obama to beat the much more qualified Mitt Romney either. However both losses occurred. As the comic depicts, this is what happens in Obama’s America.

Liberals could have interpreted this as the little guy getting the win over the giant, a sort of David v Goliath. But Liberals don’t think in terms of triumph, but in terms of loss.

One thing is for sure. University students helped get America’s biggest embarrassment since Jimmy Carter re-selected. I’d say they are entitled to a bit of harmless fun at Obama’s expense.