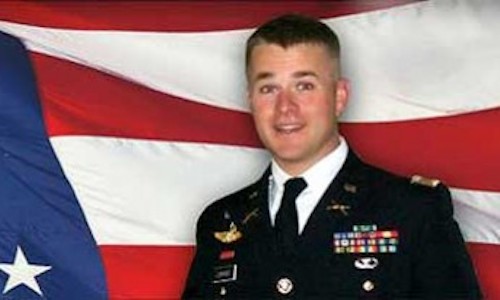 In August 2013 Army 1LT Clint Lorance, 28, of Celeste Texas, was found guilty of 2 counts of murder.

Lt. Lorance volunteered to serve two combat tours; 15 months in Iraq and 7 months in Afghanistan. But upon his return home, the ground combat platoon leader in the 82d Airborne Division was sentenced to 20 years in Ft. Leavenworth on two counts of murder.

What was his crime?

In July 2012, 1LT Lorance ordered the engagement of two Taliban scouts who were tracking his platoon’s movements while on a patrol in Kandahar province, a platoon that had recently experienced losses, including the previous Platoon Leader.

According to our ridiculous Rules of Engagement, soldiers in a combat zone are told to hold their fire unless there is evidence of hostile action or direct hostile intent.

I spent two and a half years in southern Afghanistan, and we all knew the Taliban utilized fighters on motorcycles and cell phones as scout/trackers. If there are enemy combatants reporting your patrol movements in order to facilitate an attack, how is that not hostile intent?

This is utter BS and I implore true Americans, and veterans, to melt down the White House, DoD, and Department of the Army phone lines and email.

To further explain the ludicrous parameter of our military’s ROE (Rules of Engagement), consider the words of Navy SEAL Marcus Luttrell, from his epic narrative, Lone Survivor:

But we were also told that we could not shoot that camel drover before he blew up all of us, because he might be an unarmed civilian just taking his dynamite for a walk.

And a couple pages further:

The truth is, in this kind of terrorist/insurgent warfare, no one can tell who’s a civilian and who’s not. So what’s the point of framing rules that cannot be comprehensively carried out by anyone?

Rules that are unworkable, because half the time no one knows who the goddamned enemy is, and by the time you find out, it might be too late to save your own life. Making sense of the ROEs in real-time situations is impossible.

Luttrell sums up the problem of ROE written up by political heads in the safe and sterile environment of DC:

Thus we have an extra element of fear and danger when we go into combat against the Taliban or al Qaeda — the fear of our own, the fear of what our own navy judge advocate general might rule against us, the fear of the American media and their unfortunate effect on American politicians.

This is what our soldiers are up against. Marcus Luttrell’s worst case scenario was played out in real life for 1LT Clint Lorance.

Lorance was concerned with safeguarding his platoon in a land where, in the words of Marcus Luttrell, “These terrorists/insurgents know the rules…They’re not their rules. They’re our rules, the rules of the Western countries, the civilized side of the world.”

A site has been set up, Veteran Lieutenant Lorance, where Americans can sign a petition, write Congress, make donations, or become a Regional Campaign Manager to help defend and free Lorance.

The video below lays out the case.

“Okay…let me get this straight. President Obama can order drone Hellfire missile strikes in Afghanistan…knowing full well all the civilians in the building and area will be killed as well (some 7,000 killed)…but one soldier gives an order to protect his platoon from what could be a suicide bomber, and kills 2 in a war zone, and HE gets charged with murder?”

That’s about the size of it. And these actions are indeed pure BS.

Army 1LT Clint Lorance is a hero and deserves our honor, not censure or prison time.