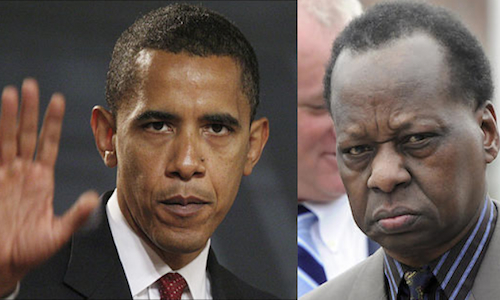 Now, after the president’s spokes-prevaricators said that Barack Obama had never met his father’s half-brother Omar Onyango Obama, affectionately referred to by many as Uncle Omar, we come to find out that that’s another lie.

Yet in a way it’s understandable that Barack Obama would want to place distance between himself and his colorful Kenyan family, some of whom have lived America illegally for 50 years, still mooch off of welfare, and in Omar Onyango Obama’s case, give new meaning to the words ‘drunk uncle.’

Omar made his first public appearance when he tried to call the White House after banging back a few brewskis at the Chicken Bone Saloon, climbed into his white Mitshubishi SUV with a blood-alcohol level of 0.14, nearly rear-ended a police cruiser on a Framingham, Massachusetts street, and was arrested for a DUI.

Apparently the liquor store manager never got the memo instructing him to stick to the story that his nephew never met him.  That’s why Obama’s uncle informed the arresting officer…