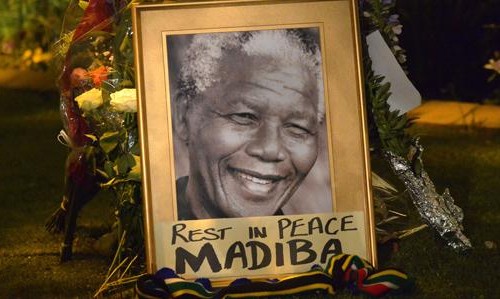 Based on the abysmal public opinion polls Barack Obama has been subjected to in recent days, it must have been quite thrilling for him to speak before 94,000 people in FNB Stadium at Nelson Mandela’s memorial service in Johannesburg, South Africa.

Reminiscent of INVESCO Field, the event came complete with weeping, flags, and cheering.  Oprah Winfrey was even there.  The only thing missing from the occasion were those illustrious Greek columns lending Zeus-like gravitas to the celebrated speaker.

Leaving aside the controversy that surrounds the former anti-apartheid revolutionary’s communist connections and nefarious friends, it’s sort of ironic that a man vigorously decimating America’s liberty chose to extol a person many view as being singularly responsible for bringing freedom to the black majority of South Africa.

Nonetheless, as cynical as it may seem, and judging from the president’s fascination with his own importance, one can’t help but sense that, couched within the sentimental platitudes, Obama’s tribute to Mandela may have been laced with subtle parallels he hoped the crowd might attribute to him.

Not only that, but when praising Nelson Mandela for fighting the very type of oppression the president imposes on what was once the freest nation in history, Barack Obama’s stunning lack of self-awareness was again made evident.

Next the president mentioned the Cold War, Kennedy, Khrushchev, and Lincoln, and then it was Gandhi and resistance; Martin Luther King, Jr.; and “the oppressed and the moral necessity of racial justice.”  He even praised Mandela for embracing Alinsky-style tactics, which include making sure to “study not only those you agree with, but those who you don’t.”

The man who once said that the U.S. Constitution is “fundamentally flawed” went so far as to compare Nelson Mandela to America’s Founding Fathers.  Priding himself on being a “fundamental transformer,” Barack Obama praised Tata Mandela for “erect[ing] a constitutional order” in South Africa similar to the one he is currently in the process of dismantling in the U.S.

Thus far, in five years, Barack Obama has yet to confess to even the tiniest failure.  Yet he lauded Mandela’s humility and straightforward self-deprecation, and admired the South African’s insistence on “sharing with us his doubts and fears; his miscalculations along with his victories.”

Having claimed that Mandela exercised “the power of action … [by] … taking risks on behalf of [his] ideals,” Barack sounded as if he identified with those qualities, as well as Mandela’s “proud rebelliousness” and “stubborn sense of fairness.”

Quite frankly, if the president had not been hiding behind a eulogy, when he pointed out that “[a]ction and ideas are not enough; no matter how right, they must be chiseled into laws and institutions,” his grandiloquence could have passed for another campaign speech.

The president noted that Nelson Mandela was “not only a leader of a movement, but a skillful politician,” and he would know.

Mandela drafted a constitution that Obama called “worthy of this multiracial democracy; true to his vision of laws that protect minority as well as majority rights, and the precious freedoms of every South African.”  For those who have ears to hear, that’s when things veered into the troubling, because this guy talking about drafting constitutions true to just one individual’s “vision of the laws” should make every American queasy.

After that, eulogizing turned to evangelizing.

Initially, there was the usual progressive prattle about “oneness to humanity; that we achieve ourselves by sharing ourselves with others, and caring for those around us.”  Then the law-changing heartbreaker hailed Mandela for changing both laws and hearts.

Having a platform in the home of apartheid gave president Obama the opportunity to also dredge up hard feelings and stir up memories of racial tension, an opening he never passes up.  He had this to say:

We know that like South Africa, the United States had to overcome centuries of racial subjugation. As was true here, it took the sacrifice of countless people – known and unknown – to see the dawn of a new day…but in America and South Africa, and countries around the globe, we cannot allow our progress to cloud the fact that our work is not done.

From there it progressed to the usual talk of social injustice, bullying, religious oppression — which must have been on behalf of misunderstood Muslims — and the “no matter whom you love” gay-rights lecturing.

Alluding to his own political opposition, the president said, “There are too many of us who happily embrace Madiba’s legacy of racial reconciliation, but passionately resist even modest reforms that would challenge chronic poverty and growing inequality.”

The words, “and there are too many of us who stand on the sidelines, comfortable in complacency or cynicism when our voices must be heard,” brought to mind the orator trying to silence those many of his acolytes on the left refer to as “teabaggers.”

The president quoted Mandela’s poetic jailhouse references to “strait gates,” “scrolls…charged with punishments,” and personal declarations of being “master of my fate…and captain of my soul.”  As a matter of fact, Barack Obama even found time to snap a playful selfie featuring British Prime Minister David Cameron and Danish PM Helle Thorning-Schmidt and to swap seats with Michelle.

Finally, after successfully inserting himself into the annals of South African history, Obama then turned his attention toward home and the advancement of a vision that is the very antithesis of what he himself claimed Nelson Mandela stood for.