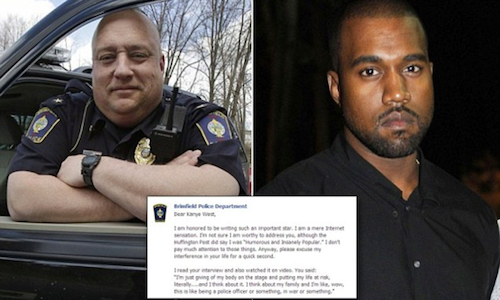 An Ohio police chief who is well-versed in social media has written an open letter to Kanye West addressing comments the star made likening himself to police officers and military personnel.

David Oliver, 45, is known for using the Brimfield Police Department’s Facebook page to scold criminals – and more than 98,000 followers are fans of his updates.

Oliver writes, in a letter dripping with sarcasm, that he’s not sure he’s worthy of addressing such a major star as Kanye West.

I am honored to be writing such an important star. I am a mere Internet sensation. I’m not sure I am worthy to address you, although the Huffington Post did say I was “Humorous and Insanely Popular.” I don’t pay much attention to those things. Anyway, please excuse my interference in your life for a quick second.

I read your interview and also watched it on video. You said:
“I’m just giving of my body on the stage and putting my life at risk, literally.….and I think about it. I think about my family and I’m like, wow, this is like being a police officer or something, in war or something.”