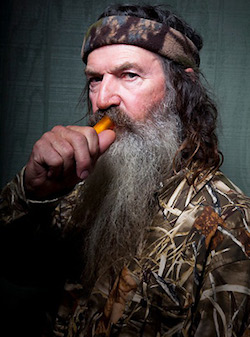 Phil Robertson, currently on extended hiatus from A&E’s Duck Dynasty is my kind of guy!

Phil tells it like it is. He’s uncompromising in his convictions, unashamed of his faith in Jesus Christ, and he speaks in a way most people, whether they want to admit it or not, secretly agree with.

Although wealthy, Phil is unimpressed with luxury and generally disinterested in the trappings of fame or riches.  Mr. Robertson worships his God, adores his wife, and loves his family and his country. Once, when Phil was asked about health care, this is the God-centered, no-nonsense answer he gave:

This is a man who hunts in the Louisiana backwater, eats squirrel brains, skins catfish, views the world of nature through the eyes of a Bible-thumper, and is not shy about saying that, if he had a choice, he’d rather not take his giggling granddaughters fishing.

So when the quiet man behind the scraggily beard speaks, after listening to the Teleprompter Thespian with zero core convictions promoting lies for five years, Phil Robertson is a breath of fresh air.

Just days ago Phil made it clear he’d rather go duck hunting than spend the afternoon being interviewed by an elderly liberal. GQ, taking a wiser tack, sent their writer to Louisiana to shadow the Robertsons for the story.

In the GQ interview, Phil, speaking of God, morals and repentance, had this to say about homosexuality:

It seems like, to me, a vagina – as a man – would be more desirable than a man’s anus. That’s just me. I’m just thinking: There’s more there! She’s got more to offer. I mean, come on, dudes! You know what I’m saying? But hey, sin: It’s not logical, my man. It’s just not logical.

Logic is the key word.  Phil was just explaining logistics to the “dudes” and expressing his own personal preference.

A sinner saved by grace and a “product of the…drug, sex and rock and roll 60’s,” Phil insists that he leaves the judging of sin to Almighty God and considers it his job to just love people and preach the Gospel.

Yet despite his respect for all living things, it was inevitable that Robertson’s honesty would not be well-received by the liberal, gay-loving side of America. And lo and behold: the ink was barely dry on Phil’s interview when GLAAD condemned Robertson straightaway, calling his sentiments “vile.”  In response, A&E promptly curtsied to the gay community and placed Phil on hiatus for an undetermined amount of time.

“Phil and his family claim to be Christian, but Phil’s lies about an entire community fly in the face of what true Christians believe.”