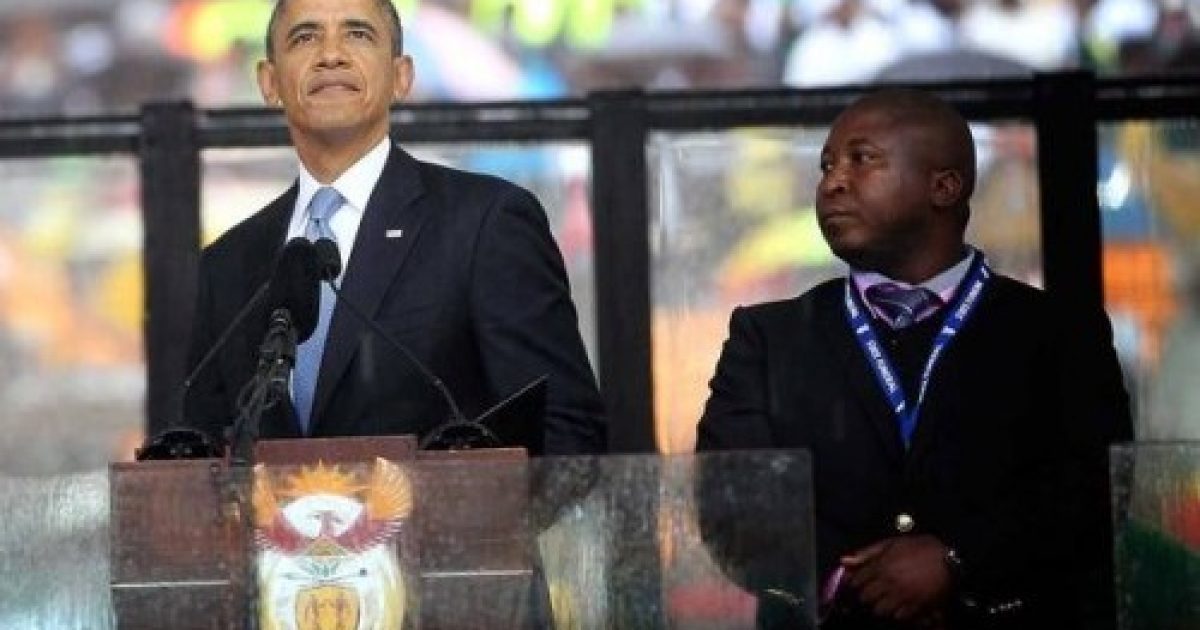 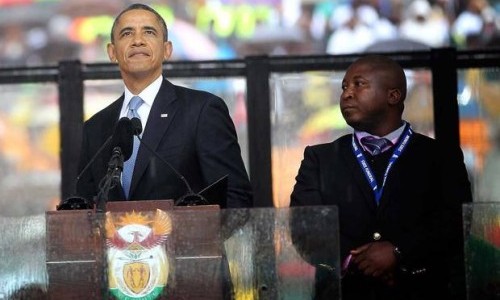 It couldn’t be more appropriate! America’s fake president’s speech was accompanied by a politically correct albeit fake deaf interpreter.

Braam Jordaan, a deaf board member of the World Deaf Federation, has leveled the accusation against the Nelson Mandela memorial interpreter of making up signs as he went along. Mr. Jordaan insists that “The structure of his hand, facial expressions and the body movements did not follow what the speaker was saying.”

The problem that’s being overlooked is that the poor man was commissioned to convey what Barack Obama was saying. He probably ran into trouble trying to figure out how to express the words of a person who, while not deaf, can tend to be somewhat dumb.

Nevertheless, Jordaan swears the guy doing the signing during Obama’s speech was simply making up his own language, which fits Obama, who makes things up as he goes along, too.

Jordaan lamented, “Thanks to this fake interpreter. What happened today will be forever aligned with Nelson Mandela & the Deaf Community.”

Is Jordaan equally outraged by a fake president shaking the hand of a Cuban dictator and then taking selfies with a blonde Danish chick while his wife glowered at him and then humiliated him by making him change seats? That’s “forever aligned” with Mandela’s memorial service too.

Nonetheless, those defending the imaginative sign language interpreter maintain he was communicating in South Africa’s Zulu language. Others are arguing that South Africa has just one sign language, which incorporates all regional dialects. That kind of attitude suggests that even in a country that prides itself on its eclectic populace, not everyone is open to the cultural diversity of the deaf community.

In fact, deaf news blog The Limping Chicken said the interpreter was using a “strange repetitive rhythm to his movements…[ and]… the structure of his hand and body movements didn’t seem to change no matter what the speaker was saying.”

That really isn’t a fair assessment; maybe the misunderstood signer was rap-signing, which would explain him mimicking Jay-Z-like hand movements.

Professor Bencie Woll, director of Deafness Cognition and Language (DCAL) Research Centre based at University College London, was not amused. Woll said that “What he was doing looked extremely odd. There has been almost universal agreement among deaf South Africans they did not recognize it.”

Yeah, but think about this: if the sign language interpreter wasn’t peculiar he wouldn’t have fit in with some of the people in attendance, especially one or two standing next to him at the podium.

Also attending the Mandela service was Wilma Newhoudt-Druchen, the first deaf woman to be elected to the South African Parliament. Wilma tweeted this: “ANC-linked interpreter on the stage with dep [sic] president of ANC is signing rubbish. He cannot sign. Please get him off.”

Oddly, Ms. Newhoudt-Druchen did not mention the “rubbish” people were subjected to by certain people speaking on the stage beside the sign language interpreter, nor did she suggest that that person should also be removed.

Bruno Druchen, National director of the Deaf Federation of South Africa, said that the gentleman doing the signing – sort of how when Obama speaks there’s really no meaning – “was moving his hands around but there was no meaning in what he used his hands for.”

Ingrid Parkin, principal of the St. Vincent School for the Deaf in Johannesburg, said she’s receiving complaints from the worldwide deaf community. The principal was told that the portly man’s movements look “like he’s signing gibberish.”

Another complaint was that there were no accompanying facial expressions to convey the emotions of the leaders. Now for that, the expressionless signer could have certainly used Michelle Obama’s assistance. America’s first lady is world-renowned for expressing feelings via facial expressions.

Parkin argued, “This man himself knows he cannot sign and he had the guts to stand on an international stage and do that?” And why not? It’s not much different than running for president and winning a Nobel Peace Prize while knowing full well you don’t deserve the position or the prize.

Official sign language interpreter Nicole Du Toit said that the man on stage purporting to sign was an embarrassment. “Only he can understand those gestures…It was horrible, an absolute circus, really, really bad,” she said.

So, although the mystery signer for the South African deaf community may have been a sham, in truth, we can’t be too hard on the guy. After all, isn’t he just a gesticulating, non-speaking version of what America has been subjected to for five years by Barack Obama?

Like South Africa, America also has an imposter standing on the stage pretending to be something he’s not, making no sense, and turning every event into an “absolute circus.” The only difference is that so far, no one has told him to sit down and shut up.