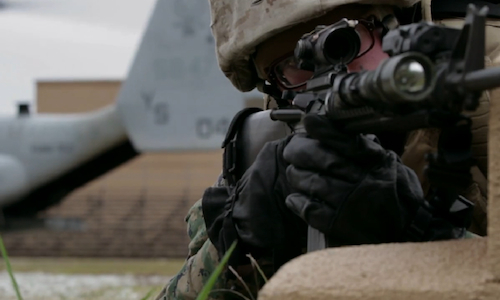 For years the Left and the feminists have been pushing for women in combat, despite the physical strength disparity between men and women.

And it appears, for the sake of political correctness, even to the point that it could get the soldier or her unit killed, the rigorous physical requirements are being “softened.”

Females in the Marine Corps currently are not required to do even a single pull-up, and a deadline mandating that by Jan. 1, 2014, they be able to do at least 3 pull-ups as part of their training has been delayed for at least a year, the Corps quietly announced on social media.

Unlike their female counterparts, male Marines have long been required to do at least 3 pullups as part of the Physical Fitness Test (PFT). That’s the minimum requirement for males.

A Nov 20 Tweet from the U.S. Marines (@USMC) highlights the pull-up issue: 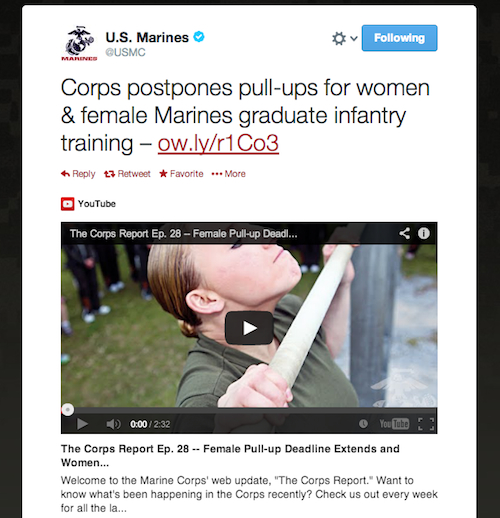 Now here’s this rub. These women are to be commended and most likely passionate about serving their country with the few, the proud. But the duty of Marine Infantry?

Infantry is the central component of Marine ground forces. Infantrymen are trained to locate, close with and destroy the enemy by fire and maneuver, or repel the enemy’s assault by fire and close combat. Riflemen serve as the primary scouts, assault troops and close combat forces within each infantry unit.

Within the MEU
Marine ground forces are organized into a Battalion Landing Team with three rifle companies at the core. Each company is made up of three rifle platoons and one weapons platoon.

So what this tells me is that the strength of the “central component of Marine ground forces” may be weakened if strength requirements are compromised. And if that infantry is weakened in the least, it can result in mortal danger for each and every jarhead.

To me that is unacceptable. Our Troops are America’s treasure, the tip of the sword keeping our liberty intact. These warriors deserve the strictest standards to ensure success of their operations and missions.

But I’m just a civilian looking on. Perhaps the physical strength of an Airman, Soldier, Sailor, Marine or Coastie is not as vital as I’ve been led to believe. I pray to God I am wrong.