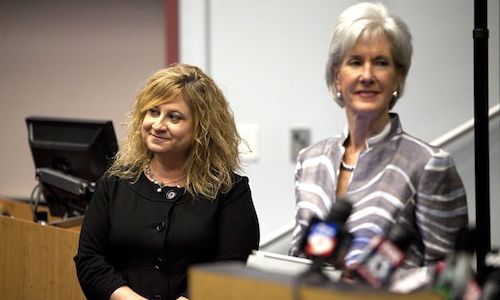 Dollars to donuts, Florida + library = senior citizens, which is why being prematurely gray makes Sebelius so approachable for certain age groups.

That’s good, because the chief Obamacare spokes-falsifier, Kathleen Sebelius, matter-of-factly surprised a group of local residents at a Miami library with the news that “There are some individuals who may be looking at increases” in health insurance premiums.

Standing in the shadow of the stacks, the HHS secretary clarified for the timeworn that you “cannot make a statement based on cost unless you compare what they had to what they’re going into.”

Sebelius, bearer of good tidings and more bombshells, popped in on the Sunshine State to badger shell-shocked residents to enroll on the website that isn’t working.

In addition, she informed a group that probably hasn’t even fully mastered the computer mouse that if they manage to live long enough to get enrolled, they shouldn’t be surprised if, despite their fixed incomes, they end up paying higher premiums.

In other words, henceforth, the advocates of freedom of choice will be doing the choosing, and if that choice happens to cost more than Americans are able to afford, then pipe down…