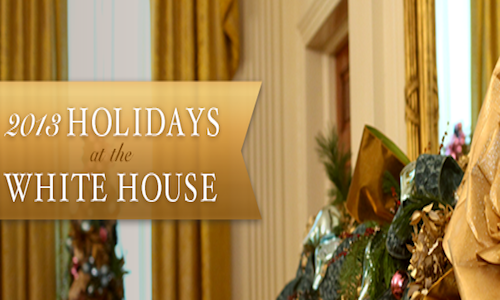 Sometimes in life, when you least expect it, things just come together perfectly. Take for example the irony of first lady Michelle Obama previewing the 2013 White House holiday décor on the same day the president recalled that he did indeed meet his father’s brother/long-lost uncle, Onyango “Omar” Obama.

This year’s Gather Around: Stories of the Season couldn’t be a more appropriate theme for the Obama family to be inspired to lay claim to lost traditions with family members like formerly-estranged Uncle Omar.

During the recent holiday press preview, Michelle Obama told the children of military families that this Christmas for the Obamas the “goal is for every room and every tree to tell a story about who we are and how we gather around one another to mark the holidays.”

With the president’s kinfolk from Kenya back in his life, celebrating the stories of his own family would certainly contribute to the fabric of how a diverse nation of Americans celebrates this special time of year. Telling stories about who we are and “how we gather around one another” and being equipped with discussion topics from Organizing for America’s “Healthcare for the Holidays” propaganda just screams ‘Obama Christmas Family Reunion.’

Guests like Aunt Zeituni, Uncle Omar, and even the president’s half-brother George would be a perfect addition to holiday family time spent with Kenya’s most famous son, his lovely bride, and their two adorable daughters.

If the Obama extended family decides to grace the White House with their presence, Omar and George can bunk in the Lincoln Bedroom and Aunt Zeituni can crash on a roll-out cot in Grandma Marion Robinson’s boudoir.

Up and around touring the premises, Obama’s kinfolk can sample the 300-pound gingerbread house while munching on a few of the 1,200 Springerle cookie ornaments.

If the president decides to set a leadership example and ‘lay claim to lost traditions,’ then in the same fashion as he does for his annual Iftar dinner, he can host a traditional Kenyan family Christmas celebration.

White House chef Sam Kass can rustle up rice pudding, and on a spit out back he can roast some nyama choma, which consists of chicken, lamb and a whole variety of other meats.

After filling up on a buffet of South African goodies such as wali wa nazi, plantain banana stew, and sausages made of ground meat parts and goat blood encased in goat intestines, the “Let’s Move!”-friendly Kenyan Christmas dancing can officially begin, which traditionally continues far into the night.

The only problem the president might run into, besides disturbing the neighbors with the relentless drumming on the sikuti, is trying to supply Uncle Omar and brother George Obama with enough libation to keep them interested in the family reunification effort for the duration of the holiday season.

Uncle Omar is a package store manager from Framingham, Massachusetts who was arrested in 2011 for a DUI, so his adult beverage needs are pretty basic. However, George Obama is an entirely different story. Allegedly George lives in a hut in a Nairobi slum where his neighbors call him ‘Mister President!’

Once addicted to cocaine and heroin, George claims to have kicked both habits. Instead, from morning until night, the younger Obama supposedly keeps his whistle wet with Chang’aa — a spirit distilled with maize and spiked with chemicals.

To to get all the ingredients necessary to provide George with ample quantities of Chang’aa, Sam Kass will have to arrange sizable shipments of maize, ethanol, embalming fluid, and/or battery acid.If mixed incorrectly, Chang’aa can cause blindness and death.

Regular drinkers suffer liver and kidney failure and mental damage called ‘wet brain,’ the latter of which makes one think George’s older brother ‘drunk with power’ Barry may have occasionally sampled a shot or two while visiting the clan in the motherland.

But one thing is certain – Aunt Zeituni and probably Uncle Omar haven’t signed up for Obamacare as of yet. So at least the president can engage them in “Healthcare for the Holiday” dinner table conversation.

As for George, if the president plies his brother with enough Chang’aa he can probably convince him to stay in America and start a slumdog football team on the South Side of Chicago to help promote healthcare.gov to “young invincibles.”

Either way, with Uncle Omar’s new green card in hand, there is cause for family celebration. Moreover, now that Uncle Omar has the same status as Aunt Zeituni, who attended her nephew’s 2009 inauguration, what better time to make up for lost time than Christmas?

That’s why Barack and Michelle, after expressing a desire to “Gather Around: Stories of the Season,” couldn’t ask for a more perfect group to revisit lost traditions with than Uncle Omar, Aunt Zeituni and the president’s brother George Obama.

And so the hope is that Kenya’s very own magi are eager to spend the holiday season wallowing in the warm, welcoming embrace of the first family.