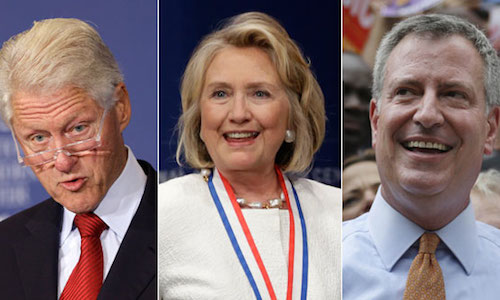 The Bible says in the book of Amos, “Can two walk together, except they be agreed?”

So it follows that Bill and Hillary Clinton would be in agreement with New York City mayor-elect Warren Wilhelm, Jr., aka Bill de Blasio.

To prove it, the former president, with his presidential-hopeful wife Hillary at his side, will officially swear in the new mayor who, despite being unaffiliated with any religion or church except for an admitted interest in Marxism-inspired liberation theology, has chosen to symbolically place his hand on socialist FDR’s bible.

Hillary and Bill enthusiastically endorsed de Blasio for mayor.  However, it’s doubtful that the Clintons’ decision to do so is solely about de Blasio having formerly served as campaign manager for Hillary’s U.S. Senate race in 2000 or having worked as a HUD official in Mr. Clinton’s administration.

To safeguard her own political aspirations, Hillary Clinton likes to pretend that she is a centrist, to the right of Barack Obama.

The truth is that Hillary is so keen on Mr. de Blasio, who appears to be to the left of Karl Marx, that in October the former Secretary of State lent her Democrat star power to a million-dollar fundraiser in support of the incumbent New York City Public Advocate’s mayoral bid.