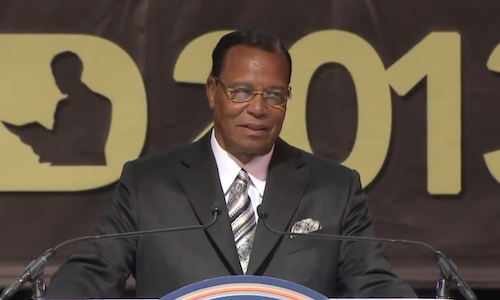 By now Americans should be well aware of the President’s fondness for people and groups aligned with the Muslim Brotherhood.

Indeed, Obama’s appreciation of all things Islam does not stop there. Thanks to Adam Andrzejewski‘s watch dog organization, Open the Books, we discover that Louis Farrakhan, rabid Nation of Islam leader, has a little pet project, Muhammad Farms, which received $103,529 in aid between 2008 and 2011.

To be fair, the group did receive $26,357 under the Bush administration.

Within the geographic borders of the City of Chicago, 930 entities received an aggregated total of $6.129 million in federal government farm subsidy payments.

Federal farm subsidy program dollars are flowing into the “urban areas”- where there are no farms. The recipients include grain traders and members of the Chicago Board of Trade, wealthy second generation inheritors, and non-profit organizations such as the Mallard Habitat Foundation and a charity of The Nation of Islam. Many entities receive the federal subsidies at their downtown loop office buildings or residential mansions.

Nearly every neighborhood in the city receives federal farm subsidy payments- including the Gold Coast, Downtown-Loop, Lincoln Park, and even the President’s neighbors in Hyde Park.

And further down in the report:

In Chicago, the 12th highest farm subsidy recipient is Three Years Economic Savings, Inc- a charity addressed at the home of Minister Louis Farrakhan, leader of The Nation of Islam. The entity also received a “commodity loan” for an additional $26,357 under the George W. Bush administration.

Full disclosure: my relatives are hard-working grass seed farmers who have made a good living raising Bent and Fescue over the years. I have wonderful memories of summers driving John Deere hillside combines and swathers and laying land with the Graham plow behind the Massey Ferguson. So I have a rock-solid appreciation of farmers and farming.

But the numbers revealed in Adam Andrzejewski’s report point toward “Massive amounts of ‘farm subsidies’ flowing into America’s urban areas.” The waste of the federal government is incomprehensible, and the flow of taxpayer monies to hate-infused groups such as The Nation of Islam is despicable.

…farm subsidies today have nothing to do with “preserving the family farm.” Wealthy investors have piggy-backed on a growing government program and made the largess of farm subsidies part of their investment portfolio. Many of these wealthy investors don’t live in “rural areas,” but instead utilize “farm managers” and taxpayer dollars to maximize return on their “farm” investments.

In fact, small family farms are not receiving much money. Our analysis shows that billions of the FY2008-11 subsidies flowed to just 1.4% of recipients – those receiving at least $250,000!

All of this under the watch of our Commander in Chief, the Chicago-formed man who was raised on Alinsky’s Rules for Radicals and mentored by full-fledged communist, Frank Marshall Davis.

Obama promised to fundamentally change America, to spread the wealth around.

Let’s face it, we have (at least) a socialist presiding at 1600 Pennsylvania Avenue and spreading the wealth around to the likes of Louis Farrakhan. America’s president is an agent of change, cozying up to the Muslim Brotherhood.

Time to be vigilant and decry the maneuvers of a radical in the White House. Time to relight the torches of freedom within our Shining City on a Hill and restore the Constitution to it’s preeminent position.