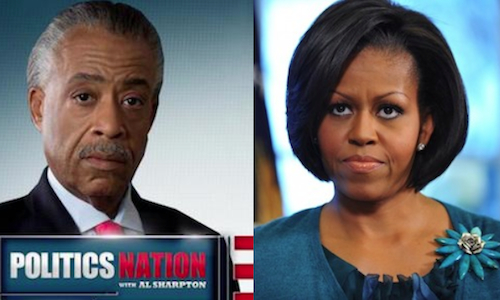 After heading up a ‘poor me’ sob-story session with mothers in the Oval Office, packing for the nine-hour flight to Oahu, and wrapping up a 16-day Obamacare public relations blitz, ‘Mom-to-Mom’ …

…Michelle found time to take to the airwaves and dial in to the “Keeping it Real with Reverend Al Sharpton” radio show.

If I might digress for moment, Al Sharpton is a man who, judging from his hairdo and his manner, is neither ‘real’ nor ‘reverend.’

Nonetheless, apart from making some inane arguments as to why everyone should sign up for Obamacare, true to form the first lady began by dragging out the heart-wrenching stories. The first one was about daughter Sasha being stricken with illness as an infant. Like most liberals who have limited experience with anything, Sasha’s bout with meningitis instantly transformed Mrs. Obama into an authority on the need for health insurance.

While talking to the right reverend, who mostly listened, the first lady ramped up the fear factor when she cited studies that show that the primary reason Americans are forced into bankruptcy in the U.S. is being buried in medical bills because they were unable to afford health insurance in the first place.