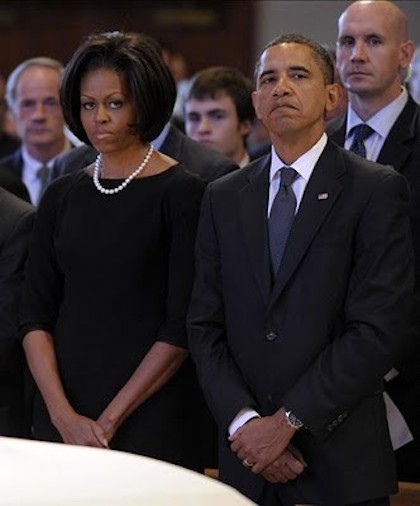 Michelle Obama is the scowling funeral attendee and Barack, whether he laughs or cries, just can’t please the woman.

For some reason the first lady either takes memorials so seriously that she glowers continuously throughout the service, or spending that much time sitting next to Barack Obama makes her perfectly-tweezed eyebrows furrow and her forehead elevens cry out for an emergency shot of Botox.

Unlike Bill Clinton, who cries only on camera at funerals, Mrs. Obama seems unaware that being on the world stage requires some acting skill.

Even if the wife of a US president is bored, annoyed, or just plain pissed off at some blonde chick yukking it up with the old man, it’s best to learn how to pretend to be happy at public events.

If you think about it, the only time Michelle Obama beams is if she’s dancing with Ellen DeGeneres, front and center at a Beyoncé concert, making menu choices for chubby Americans, or if there is food involved.

The first funeral frown that was captured for posterity was at “Godmother” of the American civil rights movement Dorothy Height’s funeral. Her husband gave that eulogy, too.

In essence, the gist of what Obama had to say about Dorothy was similar to what was conveyed at the 94,000-people strong funeral memorializing Nelson Mandela…