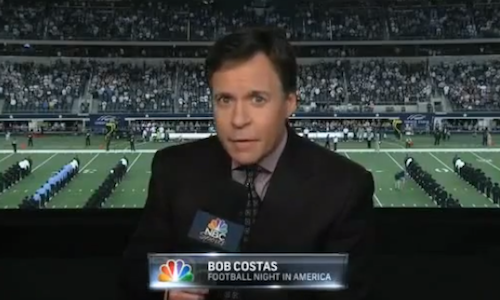 The NFL: Formerly Secret Haven for Leftists by Dave Perkins

The NFL is a left wing organization that has been lying about its political positions by omission for decades.

Now that Obama is president and “progress” seems to be happening on several left wing issues, the NFL is finally coming out of that closet on the left and revealing itself to be a bunch of big money New Yorkers: aka Leftists in the TV business.

We know now that ESPN and a lot of sportscasters are left wingers — remember Olbermann.

It is “entertainment” after all, so most of us are not naive and, thus, we know that in order to get these cushy jobs, the “talent” must believe in the Leftist ideology. The networks don’t care that the audience is for the most part red-blooded, all-American, hard working, self-reliant, flag-waving, traditional, patriotic Americans. Sports transcends politics, and that NFL demographic is comprised of the suckers from which the media mogul Leftists make money.

The political Left has always concealed itself (usually through outright lies) from the general public, because the Left has always known that full exposure doesn’t go well for them. Leftism is favored by only a small number of Americans.

However a window opportunity has presented itself, and this didn’t go unnoticed by those who have been want to cross that chasm, and blend sports and Leftist politics.

What about the Cleveland Indians, the Kansas City Chiefs and the Florida Seminoles? For decades Costas has remained silent about the issue of team names. When did using Indian names suddenly hit his consciousness. Why the sudden epiphany?

Perhaps it wasn’t sudden. Costas has talked to you about sports over the years, silently thinking how “unevolved” you were, and patiently waiting for the right opportunity to tell you so.

I mentioned Olbermann earlier, who has always harbored vitriolic hatred for the Right. He’s back in sports…where he started.

Why not start the poisoning of one of America’s only remaining meritocracies? Sports, where you are rewarded for your own hard work. Where hard work, perseverance, attitude, fortitude, and so on, are the primary reason for your success. Can’t have Americans thinking that, now can we.

The recent denial by the NFL of a paid Super Bowl ad by Daniel Defense featuring a veteran making choices on how to protect and defend his family speaks to the leftist outing of the NFL.

It is our Constitutional right to purchase and own firearms. They are not illegal, at least not yet.

Nonetheless the NFL decrees that the spot cannot air during the Super Bowl. The NFL decision-makers have an audience full of 2nd Amendment supporters and gun enthusiasts, yet they are on Obama’s side on the issue.

If the NFL fades from popularity, let it not be because of concussions or safety in general, or because “it’s racist to watch black people try to hurt each other” (as if we’re Romans in the Colosseum).

Let the NFL fade from popularity for the right reason.

Let it fade because the NFL is a creature of the Obama age. The NFL knows what’s best for the general public. Sports are becoming less and less of a meritocracy, and more and more another Leftist social experiment.

Bob Costas should sign off with the great Red Neckerson radio slogan, “That’s my opinion, and it oughta be yours!”