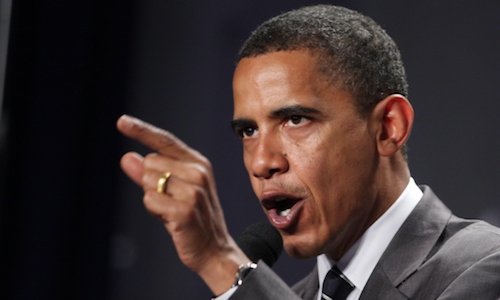 I’m not surprised that Obama wrote a letter to a constituent, wherein he called Tea Party members “Tea Baggers.”

No reason to take offense, as that would put Tea Party folks in the category of “gays.” Gays are the ones who can’t take the name-calling, which is part of the reason why Obama is so sensitive.

Obama is used to getting his own way. Most people simply dismissed his antics, or enabled him, which is worse. Obama has rarely been challenged in life, which is why he has so much hatred for the Tea Party. He considers the Tea Party’s disagreement with his policies a personal affront.

How dare they not either ignore him or not get with the program? That’s what’s supposed to happen. How else does a nobody with a record of accomplishing nothing be made to look like a Greek god?

Make no mistake about it, Obama believes himself to be a god. Even when he sheepishly tells “setup” members of his audiences, “I can’t do that without Congress,” he is merely playing for the cameras. Obama has no intention of getting permission from Congress.

How else can you pass a law which had to go through the Supreme Court, and then arbitrarily change it 5 times without going through Congress.

“We’re going to do everything we can, wherever we can, with or without Congress.” – Barack Obama

Last time I checked, presidents don’t change laws, but instead see that the laws are “faithfully executed.”

For Obama, “faithfully executed” means that he allows big money capitalists, unions, and politicians to exempt themselves from the law. Faithfully executed also means that when the law doesn’t work in his favor, Obama will continue to tweak it a bit, until it’s more to HIS liking. 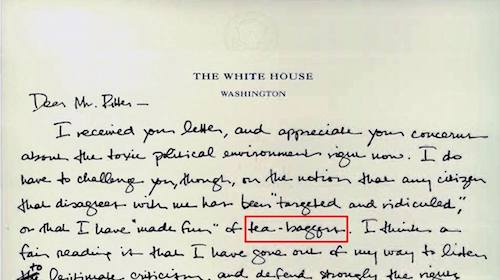 It’s not wonder Forbes has made the case for his impeachment. But what’s taken so long. Obamacare is not the first overreach by this megalomaniac. It’s time Americans stopped concerning themselves with Obama’s race, and start putting his massive ego in check. The only group willing to do this without recompense is the Tea Party.

The real legacy for America will be when history notes that it was “tea baggers” who challenged a president gone rogue.

It was “tea baggers” who restored a representative Republic in America.

It will be “tea baggers” who destroy Obama and ObamaCare. Obama knows this, which is why the Tea Party is solidly on his radar.

The Tea Party may be just a blip on Obama’s radar screen, but it’s what he doesn’t see coming that will knock him out.

And when the President wakes up, there will be a couple of tea bags hovering over his nose.