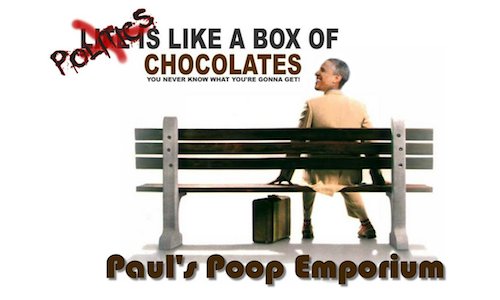 Tired of all the poop sandwiches Washington’s feeding you? Have we got a deal for you!

Come on down to Paul’s Poop Empori-Yum®, where all our poop is hand-dipped in the finest Artisan Chocolate. That’s right, folks!

We employ the nations’ premier cacao artisans to create the world’s most perfectly pleasing chocolate-covered poop, specially formulated to make it go down easy.

Listen to what some of our satisfied customers say:

“I used to choke on all the poop politicians were feeding me. Between the double-talk, lies and distortions I could barely swallow it. Now it goes down smooth and easy. Thanks, Paul!” ~Chuck from Charlesto

“Tax season used to be a real drag for me. All the crap I had to go through just to keep a little cash to pay the bills really stunk. Then I found Paul’s Poop Empori-Yum®. Paul’s Dark-Chocolate Poop Pops made me glad to let go of those pesky profits!” ~Nancy from Nantucket

“My kid was kind’a bummed he couldn’t say the Pledge of Allegiance at school anymore. Then his teacher gave him some of Paul’s new Chocolate Chunk Nuggets. He likes ‘em so much he’s forgotten all about that stupid flag.” ~Sam from Seattle

All over this great land of ours, people are learning to take the crap and eat it too.

“I’m a Licensed Contractor. I gotta be on my toes all the time just to stay caught up with all the paperwork and regulations coming down from Washington. I can’t let a thing like high-calorie poop drag me down. A friend suggested I try Paul’s low-fat chocolate-flavored energy drink. Choc-O-Rea® tastes great and it goes right through me. I keep the pounds off and I have energy to spare.” ~Mack from Montgomery

And as our founder Paul “Pauley” Paulson says, “If you don’t like all the crap, you haven’t tried Paul’s… Poop Empori-Yum®!”

SURPRISE THROWBACK FLAVOR OF THE MONTH

Order now, and as a special bonus we’ll throw in the media flavor du ‘jour: