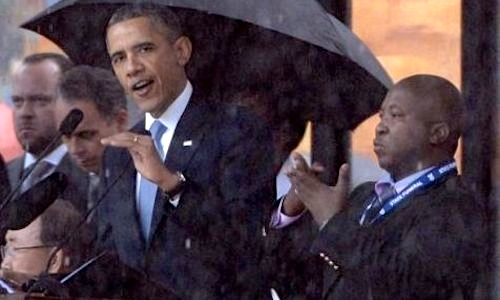 The man who created deaf communication Gangnam Style, Thamsanqa Jantjie, has stepped forward and admitted that he saw “angels” at the Nelson Mandela memorial at the FNB Stadium in Soweto.

Since the flap took place, in addition to being plagued with hallucinations, Thamsanqa admitted that his psychological history includes becoming violent “a lot,” occasionally suffering from bouts of psychosis, and being hospitalized in a mental institution for over a year.

Surprisingly, the Mandela gig is not Mr. Jantjie’s first job for the ANC. In the past he has provided sign language at other gatherings, which means either Thamsanqa really does know what he’s doing, or up until the Mandela memorial he only signed at events where no one was deaf.

After he was accused of being a fake, the organization that allegedly hired Mr. Jantjie, SA Interpreters, declined to comment on the controversy surrounding their employee.  Like Barack Obama’s phantom college transcripts, since the commotion ensued, the SA Interpreter has gone missing.

Nonetheless, Thamsanqa Jantjie, the wigwagging deaf interpreter standing just three feet from Barack Obama, maintains that his sign-language interpretation of whatever the heck the US president was trying to convey was spot-on.

Editor’s note: Ever wonder if God has a sense of humor? Consider this: a US President (elected in spite of the electorate knowing next to nothing about his true character and worldview) who is a marxist at heart, speaking at the funeral of an avowed South African communist, is mistakenly assigned a phony interpreter with a criminal record. Divine providence in action. All that was lacking was a lightening bolt.