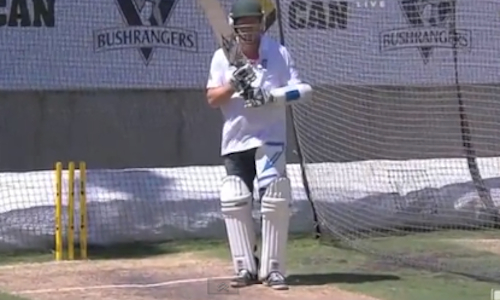 This may be the ONLY time in broadcast history that Piers Morgan appeared almost likable!

Piers had been talking a little smack about England’s (in particular, Brett Lee) poor bat skill. As reported in HuffPo UK:

Ever wanted to throw a cricket ball at Piers Morgan? Well, Brett Lee, who once broke the 100mph barrier bowling a delivery, got to do it six times at the Melbourne Cricket Ground.

Former Daily Mirror editor Morgan is in Australia for the fourth Ashes Test and has, predictably, been mouthing off (with some justification) about how useless England are with the bat. When Lee challenged Morgan to an over, he accepted it.

Although he is literally on his arse on one occasion, he doesn’t fare too badly.

And the UK Telegraph Sport noted:

Fed up with watching England’s batsmen supposedly trembling at the sight of Mitchell Johnson et al, vocal critic Piers Morgan put his arm, ribs, back, and just about every part of his body where his mouth has been for weeks and faced up to Brett Lee in the MCG nets.

With Brett Lee bowling in excess of 80mph, the outspoken CNN talk show showed pluck, but was ultimately dumped on his backside, bowled and struck three times in front of 2,000 baying Aussie fans who lined the nets, including Johnson and Peter Siddle.

At any rate…watch and applaud as Piers Morgan, the Usually Nasty, Gun-Owner-Hating Pundit takes a cricket beating and actually is a good sport about it!