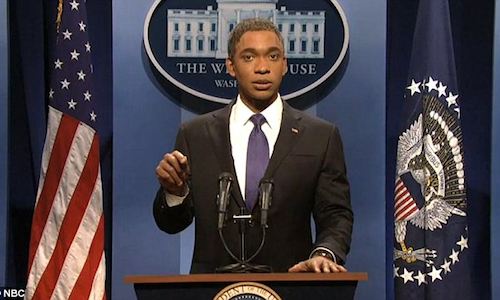 Our Selfie-in-Chief explains in his recognizable, clipped and interspersed with “uhs” tone, the series of unfortunate events at Nelson Mandela’s funeral: his selfie, shaking Castro’s hand, and the fake and criminal deaf interpreter.

“…I experienced a series of unfortunate events! First, I got roped into taking a selfie with the blonde, female, Danish Prime Minister. Some people said Michelle was angry at me for that. But I talked to her afterwards, and I can assure you, she was furious.”

“Then I got caught shaking hands with Raul Castro. In my defense, he told me he was Edward James Olmos.”

“And finally, there was a sign language interpreter who clearly had no idea what he was doing.”

SNL should be writing fast and furious thank-you notes to President Obama for all of the FREE writing material for the show!

Obama may go down in history as America’s worst president and the man who made “the selfie” known through every demographic, every age group.

Too bad the President has no concept of the definition of “public servant” or “servant leader,”neither of which include selfies.