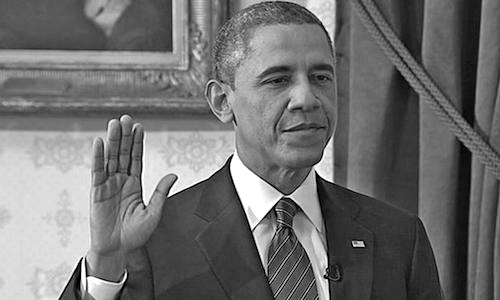 The judiciary can only hear cases brought by those with legal standing – an issue which, in this particular matter surrounding Obamacare, confounds legal scholars.

The issue of Obamacare, and the president unilaterally rewriting the law, is unique because in the history of American jurisprudence, requisite examples comparable to the repetitive acts of this president, with regards to his single handedly revising statutes and deciding law, has never been found. Stare decisis on such an important constitutional question is indeed lacking. Even so, the courts are reluctant to be drawn into political matters.

But this is not political. This “law-making/revising by fiat” goes to the very center of constitutional authority with respect to the limitations on powers of the executive branch.

Meanwhile the foundations of government sit idle and helpless. To summarize, this is of the utmost importance as it is about maintaining a wholesome separation of powers between legislative, judicial and executive – the fundamental hallmark of our system of checks and balances.

So what is the answer to George Will’s original question? What can be done? What gambit should be played?

It is rather obvious – considering Will was sitting at the very heart of it. The answer is the media. At this time, they provide the only remedy. The task falls to them.

In our system, the media is to function as the protectorate of the people. It is what the founders intended. They, as the fourth estate (and unofficial branch of government) are the backstop to tyranny.

When the cornerstones of all other public institutions tremble under the weight of injustice (as they do now); the matter should be tried in the court of public opinion. And it should be done on television to provide a forum conducive to a public hearing. Thus far, many outlets have continually failed in this charge. It is their job to fill the void.

Chief among the duties of the media is to educate and inform a free people. So how best to accomplish this, while at the same time attempting rescue of institutions that are politically compromised and derelict in their duty?

In the age of reality television, what better than a trial of a president?

The People vs. Barack Obama should be held in two phases.

The first phase could be a televised, one hour, grand jury indictment for each matter: Obamacare fraud during passage, its ongoing rewriting and the disparate application thereof; Benghazi; Fast and Furious; IRS scandal; NSA scandal; corruption, etc., etc., etc. If a true bill was returned by the grand jury so impaneled, that single matter would be referred to trial and docketed for a later date. If not, the case on those individual counts would be dismissed.

At trial both sides could be given a finite and equal time, wherein they could enter facts into evidence, give short openings and brief summations and provide oral arguments. Perhaps each affirmative count returned by the grand jury could itself be a two hour television special, broadcast on the weekend, with a brief discovery of public knowledge beforehand and a vetting of facts “in chambers” prior to trial.

Each “trial” could be conducted in a combination of both “mock” and “moot” fashion where an impartial panel of jurors was seated, facts heard, issues presented, the jury appropriately charged and a single poll of the jury taken. A simple majority carries the issue.

An outlet such as FOX News would be ideal because they have the will, gumption and intellectual honesty to attempt such an endeavor. Furthermore, they have the legal talent necessary to conduct such a venture.

For instance, Judge Andrew Napolitano could preside as judge. Peter Johnson Jr. and Kimberly Guilfoyle could act for the people as prosecutors; Geraldo Rivera and Lanny Davis for the defense. Perhaps other famous defense attorneys such as Alan Dershowitz, Jonathan Turley, Nicholas Rosenkranz or Barry Scheck would toss their hats into the ring. Given that most attorneys aren’t shy of cameras, there wouldn’t be a shortage.

Admittedly, these trials would have no force of law. Nor would they be legally binding. But they would serve two very important functions.

First they would act as an explanation to, and education of, the people. They would serve to inform the populace as to the issues in question and wherein the abusive dangers lie.

Second, any “true bills”, “findings” or “convictions”, made by those impaneled, when splashed across the headlines, would serve to pressure the administration and their agents in Congress to answer, explain, dismiss and rationalize such judgments made by the people.

This alone is the preeminent function of the press – to make those in power answer.

I fully understand and appreciate the serious nature of this submission. The trial of a president is not a matter to be suggested lightly or flippantly. But we must remember, that he, too, is but a man and like all others, subject to laws and justice. For if he is not, we are no longer a nation of laws but a nation of singular rule – subject to the dictates, wishes and wants of a single man with the ability to fashion, pass, proclaim, enforce and ultimately decide law.

Such singular rule would mean we have abolished the separation of powers and combined into one office the legislative, executive and judicial functions – that we have not elected a president but a god more so than even a king.

In short, the serious nature of the charges brought, in conjunction with the duty we owe to our posterity, far outweighs the apprehension of such an exercise.

Do we still have an independent, rigorous and free press? Or does that noble institution likewise tremble with awe and trepidation before the seat of power? Is it also under the thumb of the executive’s weight?

The people yearn and beg for leadership. Will you, the media, not backstop them? Or will you, in the hour of need, shrink from and fail at your primary task? Will you abandon the people?

Make no mistake; The People vs. Barack Obama would be a ratings bonanza. This alone should be reason enough. Perhaps FOX News or Blaze TV would be interested. If so, I humbly volunteer my services to advise, assist and produce The Prosecution of Barack Obama.

After all, someone has to do it.