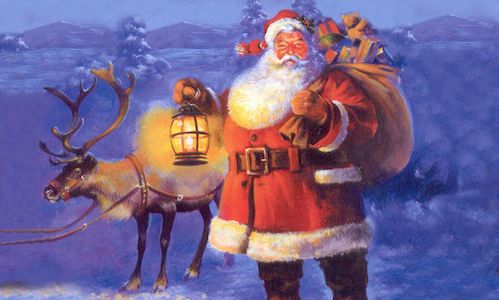 Megyn Kelly is right: Santa Claus is white. Why are Liberals in an uproar over Kelly’s comments, when they have Barack Obama?

As a young black kid growing up, I never really thought about the ethnicity of Santa Claus, I was just glad he was there every year. As a poor kid, anything that would get me a few gifts was a welcome surprise.

I did notice that Santa was always slightly different picture to picture, person to person. He always had the iconic red and white suit with the black belt, his face sported the big white beard, and he was cherubic.

However, I knew something was up. People wanted me to believe it was the same guy, but I could see the slight difference even though “white people all look alike to me.”

The last Christmas I spent with my mother before her death, my stepfather dressed up like Santa late one evening. My brother and I were awakened by my mother and escorted to the living room, where we were treated to a skinny black Santa who looked and talked exactly like “Daddy Tom.”

Nice try, but I knew Santa was white.

There were other clues; like Santa having lots of elves working for him year round in preparation for the big day. These elves were either black slaves stuck in a circa 1860’s time warp or some {insert 3rd-World nationality} working in a sweat shop.

“Who cares…just bring me my toys,” was my gleeful, self-indulgent thought.

Even later in life when the concept that Santa is black was proffered to me, I thought, “Who cares?”

Santa Claus is a concept, a construct that parents use to raise their kids.

“I guess you don’t want anything from Santa this year?”

How many parents of all colors, theists and atheists have used Santa to keep their children on the straight and narrow. The closer Christmas crept, the more the threats.

Let’s face it, if it weren’t for Santa Claus, many kids would be incorrigible. And though black people didn’t invent Santa Claus, parents certainly used that white man just as I described.

Recently on her TV show, Megyn Kelly mentioned an article in Slate by Aisha Harris, who Kelly said “was upset that Santa Claus was melanin-deficient…[white Santa] made her feel ashamed as a child.”

So white Santa Claus is the reason Aisha Harris needs therapy? What will Aisha do when she finds out that Barack Obama is more white than he is black?

Ask any child not exposed to Leftism what he thinks about Santa Claus, and you get a huge smile. Expose that child to the racist Left, and you get…Aisha.

Years ago, I heard one of my family members say snidely, “I’m not letting my kids think that some white man brings them gifts.”

I retorted, “Then by all means let them think a fictional black man is doing it, because that will make all the difference.”

Does the Easter Bunny have to be black too?

Santa Claus is about the “spirit of Christmas,” and the idea that for one brief moment in everyone’s life — man, woman, and child — there is a reason for joy, dare I say hope. Not Barack Obama “hope,” but real hope.

Hope for even a small moment to see man’s humanity in a life that for many people is a constant struggle. Santa Claus provides hope to people of all faiths, creeds, and religions, without exception.

How many conversations did you have growing up, as you tried to figure out how Santa could make all those toys? How could he deliver them in one night? Did all children leave Santa cookies and is that why he was so fat? How did Santa know how to get into houses that didn’t have chimneys? Why did he bother?

Instead of embracing the beauty of the concept that brings joy to all, regardless of color, Leftists predictably look for ways to ruin it for everybody. But they are quick to allow all the debauchery they can invent on their own.

Santa Claus was invented by white people, just like skiing, the luge, and curling, for goodness sake. If black people (or any other color people) need a hero, invent one.

Despite the media’s attempt to sanction the wife-killing, ex-con invented Kwanzaa, there is no KwanzaaClaus. The only hoopla over that so-called holiday season is from the most militant of blacks, and yet there is no hero in Kwanzaa. Even if there were a Kwanzaa hero, he would not come close to Santa Claus, at least not for this Christian.

Right is right, and Santa Claus stands for all things that Christianity represents. That spiritual foundation is one of the reasons Leftists attack the idea of Santa Claus, why they want to colorize something that transcends color.

Why do we still make a big deal about Santa, long after we have figured out that he is not real? It’s because he doesn’t have to be real to exist in you. Inside every human lies the spirit of Santa Claus. Santa Claus is everyone of us, individually, and we can demonstrate that spirit and kindness in very small ways to people whom we don’t know, if only for a season.

My mother died a few months after introducing my brother and me to “black Santa,” aka Daddy Tom. That moment remains one of the few memories I have of her. In her own small way, she taught me how not to see Santa Claus in color, but to see him as one of my heroes—Daddy Tom.

Thanks Daddy Tom (RIP) for stepping up and stepping in to play Santa Claus, who just happened to be black that Christmas.