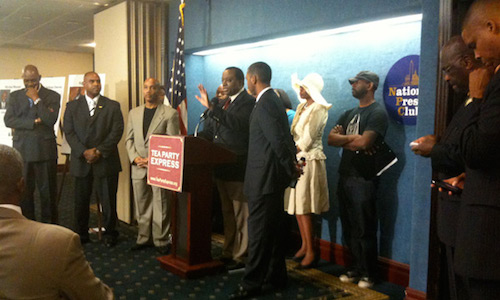 My conscience is clear. I have been deemed “NOT racist” by Liberals. And if you are a member of the Tea Party as I am, you too have been cleared of all charges.

I don’t know about you, but I was worried about the findings. As a black conservative, I secretly wondered if I was indeed racist against black people. My four sons are half-black, so was I trying to water down the black blood line?

Furthermore, I didn’t do what most ignorant blacks did, which is to vote my COLOR! Since Reagan I have been voting racist, as have other blacks. So when the time came to finally vote for the black guy, Leftists say I blew it.

White people have never knowingly had to confront the “vote your color” problem, at least not at the presidential level. Eisenhower was 25 percent black, but he was a Republican, and he could pass (for white). No blood, no foul. So white voters were not challenged with this problem until Obama. It was good to know that white people could be equally as racist as blacks, and equally as ignorant.

Back to my issue.

Ignorant Democrat blacks wanted me to believe that despite having mainly black people in my black family, I was racist against blacks. Ignorant blacks were guided by the newly-crowned racist white “haters,” or the whites who voted for Obama, thus showing their hatred for white people.

Let’s follow the logic. It’s difficult to argue with white people who hated their people so much, they were willing to forego their hatred of white people and begin hating on black people. “Spread the hate.” The minute those silly bastards got the chance, they went racist.

Back to the Tea Party.

This study was commissioned by some self-loathing white group who was determined to prove that they are entitled to their own opinions to NOT vote their color, and this is the closest they got to calling the Tea Party racists:

They know that is deeply non-PC and are conscious about how they are perceived. But focusing on that misses how central is race to the worldview of Republican voters. They have an acute sense that they are white in a country that is becoming increasingly “minority,” and their party is getting whooped by a Democratic Party that uses big government programs that benefit mostly minorities, create dependency and a new electoral majority. Barack Obama and Obamacare is a racial flashpoint for many Evangelical and Tea Party voters.

Deeply non-PC is a good thing. It means that Tea Party people are resorting back to their God-given right of individualism, one of the best isms out there.

For the full report, go here. As for me, I am still counting my black friends and will get back to you…