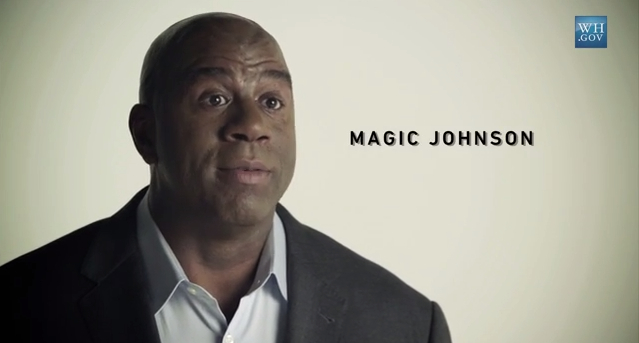 Does anybody see the irony of a man with HIV helping to sell ObamaCare?

Magic Johnson contracted HIV from having an outrageous amount of unprotected sex. If it weren’t for his wealth, he would likely be dead from AIDS.

Obama and his White House just keep pumping out the ObamaCare indoctrination videos. Makes you wonder is CNN and MSNBC have set up studios somewhere in the People’s House?

“Affordable healthcare is important to me because EVERYBODY deserves good healthcare! And when you think about it, it saved my life. And I remember when I took my physical, and they told me I had HIV over 22 years ago, if it wasn’t for that quality healthcare that I had, and the plan that I had…uh…I probably would have been dead.”

Message: Surviving promiscuous sexual activities is no longer just for the rich thanks to ObamaCare!

Is the White House signaling to Americans that if you have a life-threatening disease that requires constant medication in order for you to stay alive, ObamaCare is for you!

At least the WH is covering its bases, when you consider ObamaCare covers “sex industry workers.”