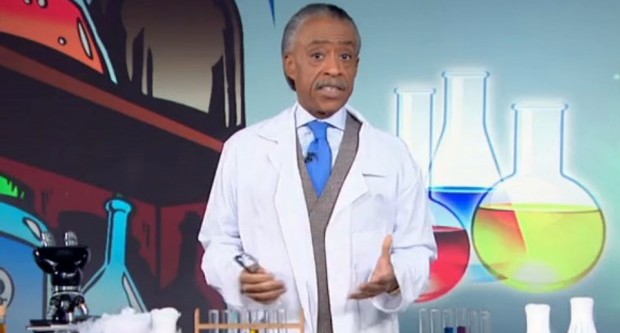 Instead of using real facts, the racial-agitator turned faux-scientist tried to exploit the “everybody believes it’s real” argument to attack those who disagree with the anthropogenic global warming theory.

Welcome back to the first Politics Nation science lab of the new year. In the lab tonight, a right wing meltdown over global warming. A winter storm is battling much of the country and climate change scientists were stuck in ice. Which means the folks over at Fox have been trotting out a few theories of their own. Check it out.

Sharpton played four one-sentence news clips from Fox News before coming back with:

These right-wingers are boiling over with denial. Just because it snows in winter, doesn’t mean the planet isn’t getting warmer. Remember, a U.N. Panel said there’s a 90% probability that humans are the primary cause of global warming.

And over 97% of climate researchers surveyed in the United States academy of science agrees. It sure doesn’t take much for the folks at Fox to hit their melting point. The results of tonight’s experiments are in. And we’ve deduced the right wing could use a new talking point. This has been a special edition of the Politics Nation science lab.