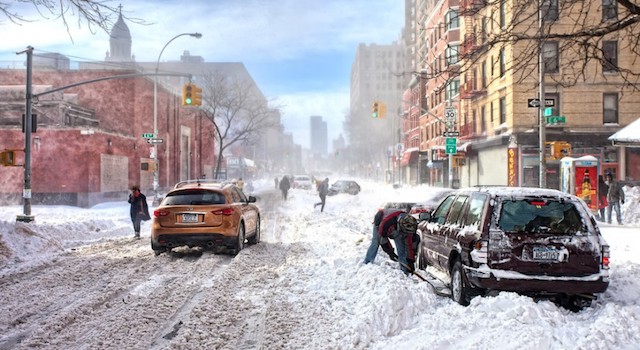 Apparently Upper East Siders (UES) in NYC think they’re getting the shaft instead of the plow from De Blasio.

What they’re really getting is a taste of communist rule. As most of you probably know, the UES is considered wealthy, and conservative by NYC standards. The residents are demographically older — this is Old Money.

Why would they possibly think De Blasio would specifically pass up their neighborhood?

A few weeks ago, right around the time of his inauguration when touting his new urban utopia, De Blasio said that certain neighborhoods would not be singled out for plowing or not plowing. He essentially said “all neighborhoods would be plowed equally.”

I’m now glad he said it, because here we are, halfway through January, in the biggest snowstorm of the season thus far, and we all get a chance to see what this “equal plowing” looks like.

Salt, snow plows and the people who operate and manage them are all finite resources. Unless you had a plow for every city block, there’s no way you could ever approach anything close to equality of the plow. Therefore, a manager must make choices regarding how to distribute these finite resources.

A capable and pragmatic manager would decide discriminately where these resources would serve the greatest good for the greatest number of people. A smart decision would be to start with centers of commerce and the roads leading in to them.

This allows for goods and services to continue flowing, and provides passage from the neighborhoods for those who work and participate in those centers of commerce. By keeping commercial centers open, the local government benefits through continued economic activity, which of course leads to taxation collected by all levels of government.

Finally, since resources are finite, a pragmatic plow resource manager would consider who contributes the most to the funding of those resources. People in the wealthier neighborhoods of Manhattan and a few in Brooklyn pay much more in taxes to the city than do those neighborhoods with large segments of the population living off the taxes paid by the former. With limited resources, it would make sense to plow the wealthier neighborhoods first. They are paying more for discretionary plowing, not to mention, they need to get to work!

Why plow or even promise to plow neighborhoods where people live in public housing and are not working? So they can go to their “non jobs”?

This is what communism looks like at the city level. Use government resources, or lack thereof, to reward your voter base in the name of equality. Punish your political and demographic enemies, banana republic style.

Those being punished are the ones who contribute the most to the overall greater good. Without them, there would be fewer public resources. THEY pay not only for the plows, but the roads themselves.

Any attempt to circumvent the public system would be taxed or regulated out of existence. The unions control everything in NY.

This wouldn’t even be an issue, if it were not for his comments about fairness. Just like Cuomo, he’s singling out certain people because of their beliefs or perceived levels of wealth. Businesses and residents who are made to be targets will move elsewhere, taking the wealth they generate with them.

De Blasio is even attacking tourism by vowing to get rid of the Central Park carriage horses…for the horse, of course. Nevermind the horses will become dog food down in Mexico.

During Guiliani’s tenure, his primary targets were criminals. So unless you’re pro-criminal, his policies had a direct and positive effect on nearly every other aspect of city life.

Cuomo is now moving left, because he thinks that’s the way the wind blows after De Blasio. Thus, his recent comments against “extreme Conservatives.”

Those comments might play well in certain communist elite neighborhoods in NYC, where he spends his time insulated by others just like him. However, it won’t play in other parts of the state or even the city, where a lot of conservatives do exist.

I think Cuomo has his eye on the nomination, but those comments may wind up costing him at the national level.

Let’s just see how long it takes this city to unravel under their newly elected communist.