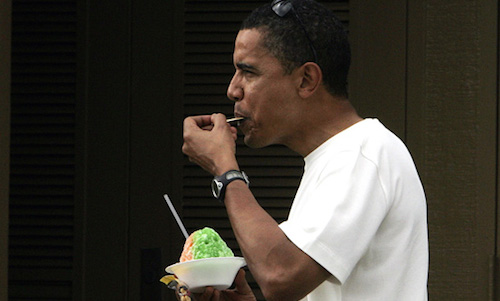 It was day 11 of the Obama family 17-day vacation, and while America languished in pure dread about what lies ahead, Obama relaxed, golfed, and worked out at the Marine Corps (not corpse) Base in Hawaii.

According to reports on New Year’s Eve, “As his motorcade passed in front of the base’s gate on the way in, two middle-aged spectators were doing aerobics in the driveway.” The two exercisers were undoubtedly trying to be proactive in anticipation of being denied Obamacare, motivated out of pure terror to do whatever necessary to head off getting sick.

Anyway, it’s January 1st and America is finding itself slowly sinking and gasping for air in treacherous Obamacare waters.  Meanwhile, the man holding the nation’s head under the water waiting for the bubbles to stop, grabbed his snorkel and headed toward Hanauma Bay Nature Preserve.

Then, drying off, in keeping with his annual shave ice tradition the president took Sasha and Malia and the usual entourage that travels around with them to his favorite shave ice shop, Island Snow, in Kailua.

Obama must feel comfortable at Island Snow, because the shop is sort of a small shrine to the president. In addition to shave ice, Island Snow has papered the walls with pictures of you-know-who and sells “Obama Kailua” t-shirts emblazoned with his campaign logo.

As his healthcare law places America in a position where a good many of us will probably find ourselves prone and on ice, to celebrate his great accomplishment the president ordered a variation of the ‘Snowbama’ shave ice cone that had both cherry and lemon-lime.

Outside the president neared a rope line where a dozen people had gathered in a strip mall by the beach.

“Oh my goodness,” one woman screamed.

“Hey sweetie, how are you,” the president said to another child.

After shaking hands with some of the people, shave ice in hand, Obama told the star-struck group, “I hope you guys have a great 2014,” which is sort of like the executioner prior to administering a lethal injection wishing the condemned sweet dreams.

Nonetheless, as he was leaving Barack Obama flashed a shaka ‘hang loose’ gesture. Then it was back to the “Winter White House” to celebrate New Year’s Eve with family and friends, where the president watched the big 2014 ball drop like a giant boulder crushing America.

Then, on to day 12: more vacationing to attend to! The First Family’s work is never done.