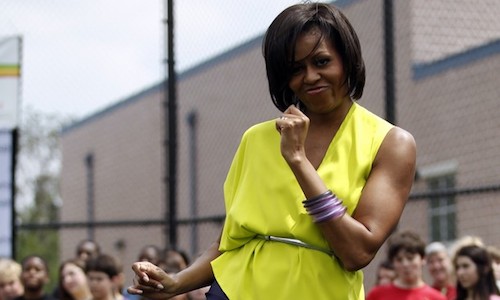 Menopausal Michelle is about to mark a half-century of a truly remarkable life. And a nation reeling from insurance premium sticker shock, higher income taxes for those with income, and healthcare horrors is about to be unmercifully subjected to hearing about yet another fun Obama family celebrity-filled gala.

Michelle’s big 5-0 arrives on a Friday, so the White House planned the birthday bash for the following night. The guest list is still a big mystery, but one would guess that Beyoncé and Jay-Z (Bey and Jay) will attend because according to “Save-the-Date” emails the party is supposed to be a “Let’s Move!” extravaganza dubbed alliteratively as “Snacks & Sips & Dancing & Dessert.”

In fact, on a December 16th visit to a children’s hospital, Michelle announced that her birthday celebration “might involve some dancing. A little Dougie.”

And that it will!  Guests are being instructed to wear comfy shoes, to eat before they arrive and, between now and the big day, to spend time practicing their best Napoleon Dynamite dance moves. In other words: cheap hosts, no food, AARP-approved footwear, and a full night of “Sweating to the Oldies!”

Yes folks, this is sure to be a party anybody 50 and over would hate to miss.

Quite frankly, although Nancy Pelosi and Harry Reid would never admit it, for the Centrum Silver/Cialis/estrogen patch crowd they run with, staying home in slippers and drooling on the couch is probably more appealing, especially if Beyoncé shows up and insists on burning up the dance floor in spike heels.

And the “eat before you come” instructions! Is that any way for a “piece of the pie/share the wealth” advocate to treat guests? If an Italian were in the White House the instructions would read:

“Come ready to mangia! Wear really loose pants, and if you make a pig of yourself, non ti preoccupare, no one will notice if you grab a nap between dinner and dessert.”

Despite the secretive nature of the guest list, one person did let the ‘Dougie out of the bag,’ so to speak: Vice chairperson of the Democrat National Committee, the naturally silver-haired, 54-year-old Donna Brazile, who is one of the lucky ones to receive a “Save-the-Date” email in her inbox.

Gushing with accolades and fond appreciation for Michelle Obama, Donna recounted what went on in the East Room after Barack was inaugurated around this time last year.  According to Ms. Brazile, after banishing wayward flies from the premises, Mrs. Obama let her hair down and proceeded to ‘raise the roof’ and let her Dougie fly.

Evidently, when R&B soul pop star, Janelle Monáe Robinson (who is no relation to Michelle LaVaughn Robinson), was about to perform, the first lady, who typically dons a sourpuss at funerals and international events, “just lit up like a spark was inside her.”

Brazile didn’t elaborate on whether the first lady’s spontaneous reaction was in response to Janelle Monáe taking to the stage, Michelle’s outfit catching fire on a lit candle, or if she was still effervescent over her poor excuse for a president husband somehow managing to finagle another four years to screw up the country.

Either way, what Donna Brazile shared was downright bloodcurdling: “We cleared the tables and we all just started dancing. We danced the night away.”

Except for when her macho husband is doing the salsa with gorgeous Mexican pop star Thalia, or snapping selfies with a Danish hottie, Donna said that the happy, cheery woman America sees bubbling over with enthusiasm every day, why, “That’s Michelle. She’s spontaneous, she’s energetic, and she gets the moment and appreciates every second she is surrounded with friends and family.”

Donna Brazile also pointed out that “That girl can dance.” Like a cockatoo grooving to the beat, Donna said, “That woman can still shake a tail feather.”

While visuals like that are fascinating, they’re really not necessary because to the delight of many, on more than one occasion, Michelle has exhibited her prowess boogying on the dance floor.

Take for instance when she gamboled with Ellen DeGeneres, shook her groove thing on iCarly, and more memorably on Late Night with Jimmy Fallon when, together with his first lady dance partner, Jimmy demonstrated “The Evolution of Dance” in mom clothes.

Hey! For Michelle’s birthday, and in honor of heroic Robin Roberts finally acknowledging her homosexuality, Fallon should consider reaffirming the LGBT community by agreeing to attend the dance party in drag and thrill the guests by doing an encore “Dougie” with the birthday girl.

In the meantime, as Obamacare woes befall the rest of the country and America “Starves & Slips & Howls & Hurts,” we all breathlessly await further details on Michelle Obama’s “Snacks & Sips & Dances & Desserts” birthday event.