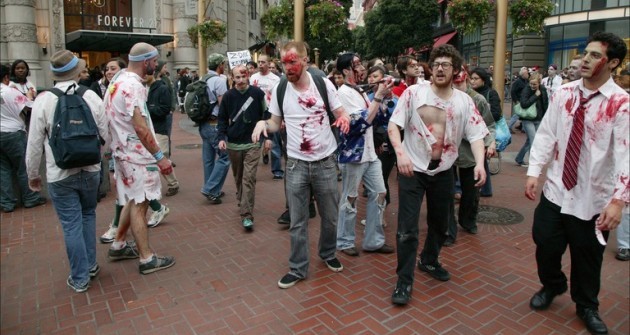 The Zombie Apocalypse may be here, because it appears that dead people are showing up and trying to pass themselves off as living.

Take for instance the mother of deceased 15-year-old Jasmine. Recently, Laurie Villarreal, Jasmine Martinez’s bereaved mom, paid a visit to the Social Security Administration, which everyone knows is run by an infallible bureaucracy.

After the IRS rejected Villarreal’s 2012 tax return and in an effort to illegally collect a $5,000 tax refund, the woman tried to pull a fast one by insisting that her dependent daughter Jasmine was still very much alive.

Government workers weren’t going to be fooled by that story, and despite being provided Jasmine’s “Fingerprints. Social Security, birth certificate, school records, everything,” the not-to-be-fooled geniuses at the SSA weren’t having any of it.

After all, if the government says you’re dead, like it or not, dead you are. And zombies may be allowed to vote, but will NOT be allowed tax refunds

Desperate to collect her $5,000, Jasmine’s mom dragged her daughter’s carcass all over creation trying to pass her off as living. Speaking from beyond the grave, Jasmine claimed, “I had to get out of school. I had to bring my ID, I had to bring everything, and they still didn’t believe [me].”

Laurie jumped through all the hoops, but was still told additional paperwork was missing. After submitting a fresh batch of forms…