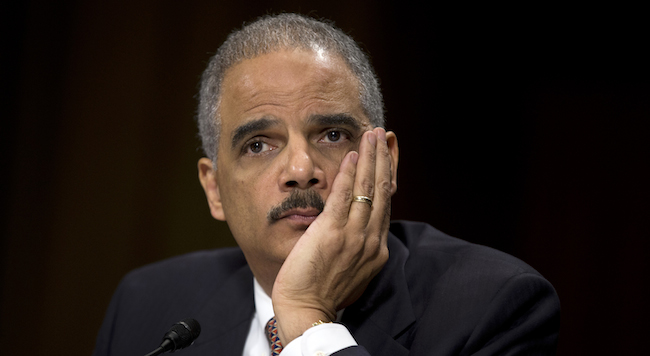 Just because marijuana is legal doesn’t mean kids will use pot, or so says Eric Holder.

Barack Obama practically made a PSA promoting drug use during his 2008 presidential election campaign. Obama continues to promote recreational drug use as no big deal, because it plays well to the youngsters, and stoners…and young stoners.

The Left sees two things with drugs: votes and tax revenue. But as usual, the Left never considers what will be left in the wake of their policies.

As reported at TIME:

Attorney General Eric Holder said Wednesday that just because states are legalizing marijuana for recreational purposes doesn’t mean minors will be able to roll up a joint.

“People cannot buy alcohol I guess now until you’re age… age 21, but young people find ways to get alcohol because adults can have access to it,” Holder said before the Senate Judiciary Committee. “I’m not sure that we will see the same thing here given what we have said with regard to our enforcement priorities.”

His comments came as Colorado and Washington state have been implementing new laws allowing recreational pot. Marijuana remains illegal under federal law, and under questioning, Holder defended the Obama administration’s stance in allowing the states to move forward with their laws while the feds work to make sure the drug doesn’t become available to minors or move across state lines.

Eric Holder was also sure nothing bad would happen if the US supplied guns to Mexico. I wouldn’t bet on anything the Attorney General had to say.