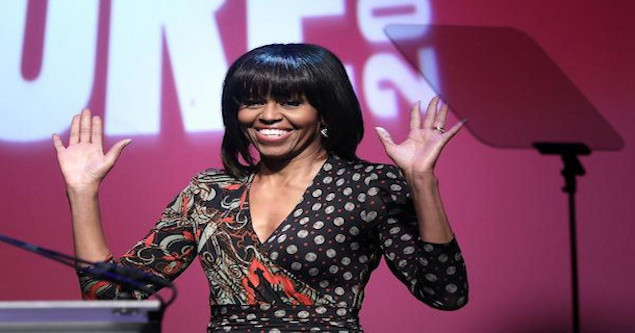 Michelle Obama is turning 50 and having a “Snacks & Sips & Dances & Desserts” dance party to mark the event.

The guest list is still under wraps, but the Bey and Jay buzz is that, as predicted, Beyoncé will be singing Happy Birthday to the first lady.

Either way, in the run-up to her 50th Michelle told People magazine she’s unopposed to plastic surgery and/or Botox to help keep things ‘tightened up.’  With that in mind, maybe it would be a good idea for party coordinator Valerie Jarrett to invite Archie Bell and the Drells to perform “Tighten Up.”

The first lady, who’s not one to skimp on personal “feel good” things for herself, said about going the Nip/Tuck-Nancy Pelosi route that:

“Women should have the freedom to do whatever they need to do to feel good about themselves. Right now, I don’t imagine that I would go that route, but I’ve also learned to never say never.”

In addition to her cosmetic surgery views, Mrs. Obama also had some half-century advice for those now enmeshed in the Obamacare nightmare: stay healthy. Although she’ll never have to sit in a clinic, be denied access, or find out her gastroenterologist is no longer covered, Michelle never misses a checkup.

As a matter of fact, during the interview, falling into the TMI category, the 50-year-old first lady felt moved to share with America that those checkups include mammograms (ouch), Pap smears (eeww), and even a colonoscopy (eeewww).

Clearly a bit heftier than she was when her husband took office five years ago, Michelle, while still obsessing about what everyone else eats, said “I don’t obsess about what I eat, but I do make sure that I’m eating vegetables and fruit.”

When not vacationing, the mastermind of the failed “Let’s Move!” campaign to reduce childhood obesity rates claims that she does exercise.  Although inflexible like her husband in more ways than one, the first lady’s newest shtick is to become flexible through yoga.

However, she is no longer maintaining her world-famous biceps with strength training or working up a sweat doing the Dougie with Jimmy Fallon.

When asked in the interview if she has peaked at 50, menopausal Michelle admitted that, much like her husband’s haughtily-positioned nose, as first lady she too is “pretty high up.”

Also in keeping with the secular atmosphere that the Obama administration works hard to establish, the first lady said that her life is “ever-evolving.” And with typical self-effacing humility contended that she doesn’t have the right to “just sit on my talents or blessings” –  regardless of how wide those middle-aged talents or blessings may spread.

Michelle looks forward to the empty nest that lies ahead in 2017, when the country is freed from socialist oppression and Malia goes to college. With Sasha following her older sister out the door soon after,  Michelle said that “at that point in life, whoa, the sky is the limit.”

For a woman notoriously alleged to have spent upwards of $10 million on personal vacations, what she might consider to be the ‘sky’s limit’ is a scary prospect indeed.

Nonetheless, after almost a month of vacationing in Hawaii (half of which was spent lounging around on Oprah’s Maui estate), within the week the big White House birthday/dance party is scheduled to take place.

Although the surprise superstar guest list has not been made public, what we do know is that the fortunate invitees have been instructed by senior White House adviser Valerie Jarrett to arrive already-fed and ready to move.  Sorry, but for the 50-and-over set, those party directives may necessitate Gas X and Milk of Magnesia be given out as party favors.

In the end, the pressing question is neither the party favors nor the guest list.

Instead, America’s concern should be whether the president is thinking about birthday gifting, at taxpayer expense, that face lift, blepharoplasty, Botox, and dermal filler that 50-year-old Michelle admits she’s thinking about.