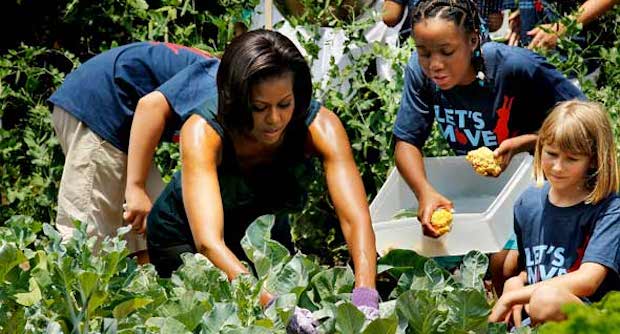 Because one of her first acts as First Lady was to serve America’s school children crap.

That’s why schools had to go BACK to “junk meals.” And apparently they get to keep them. As reported in Medical Daily:

In a reversal, the Obama administration on Thursday announced they would permanently relax [emphasis added] unpopular nutrition rules for the federal school lunch program.

The rules were intended [emphasis added] to fight childhood obesity by lowering calories and portion sizes, but proved wildly unpopular with students and parents throughout the country.

Let’s wait to see what the definition of “relax” is. And I love that Liberals always have programs that “intend” to do the things that they never accomplish. In Michelle Obama’s case, her “get fit” school lunch program cut down on obesity, while increasing anorexia, because the kids refused to eat it!

“Earlier this school year, USDA made a commitment to school nutrition professionals that we would make the meat and grain flexibility permanent and provide needed stability for long-term planning. We have delivered on that promise,” Agriculture Undersecretary for Food, Nutrition and Consumer Services Kevin Concannon said.

Nice try by Concannon to help Michelle Obama save face.

Like her husband has done with healthcare, Michelle Obama has meddled where none was needed. Kids were eating fine. The fact that kids are fat in America is a testament to how well-fed they are.

Liberal elitists must tinker, as a meth head tweaks. They break things in such a way that what they break is never the same again. In the case of food, they blame fast-food, junk food, and about everything else, but they won’t blame the group they should, which is the kids’ parents!

It’s not foods’ fault for fat kids. It’s parents who allow them to over-indulge. Believe it or not, you can survive on McDonald’s and you can do it without getting fat. Who is to say what food is better. I’d like to see some elitist puke eat only $100 an ounce caviar.

How much money have we spent changing the program, only to essentially change it back to what worked to begin with. If you’ve never had Kobe beef, you won’t miss it. Most poor kids are happy to eat, and they were surviving, dare I say thriving before they even knew who Michelle Obama was.

Government is in the business of keeping busy…keeping busy spending our money. These bureaucrats should mind their own business, and get their hands out of the pockets of taxpaying American citizens.