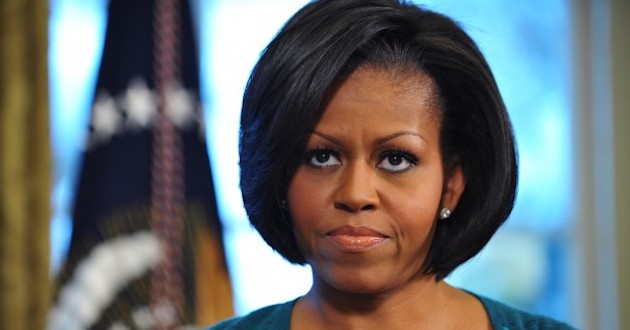 In what has to be a shock to Michelle Obama’s system, Ancestry.com did some research to find FLOTUS’ white roots, and I’m not talking grey hair.

You might not know it to look at her, but Michelle Obama has some white in her.

Now that isn’t a surprise to this black man, because I know the black color spectrum, and there are very few blacks who are “pure.” So all this bitching about white folks is really blacks upset with much of who they are.

In the case of “Militant Michelle,” according to the aforementioned article, Michelle Obama knew she had white kin folks:

First Lady Michelle Obama always suspected that she had white ancestors. But she had no idea who they were.

You’d never know it from the way she behaves. Up to now, the Obamas have run so far from their white heritage, you’d think they hated white people. Why suddenly are they getting in touch with their lighter side?

Well black may not crack, but it only pays so much. The people who have helped the Obamas the most financially are white people. And the Obamas have paid them back in spades…pardon the pun!

I suggest black people stop thinking in color, because neither POTUS nor FLOTUS is as black as black Liberals think.