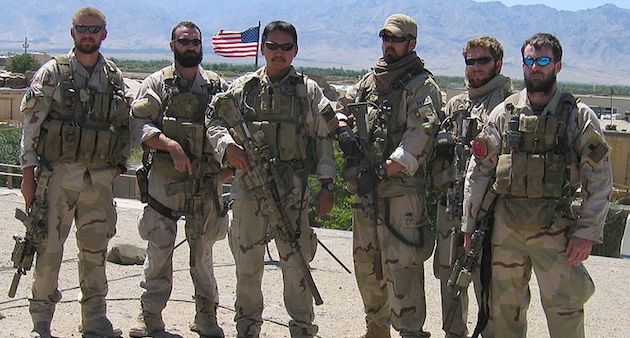 One of my friends wrote about her experience after seeing the film, Lone Survivor, where Marcus Luttrell documents how his fellow Navy SEAL were killed in Operation Redwing in Afghanistan.

In his book, Luttrell takes on the Left and the Left media. He doesn’t spare any words in his disgust for them.  You’ll see it in the movie’s dialog too, when the four-man SEAL team has to decide on what to do with the three Afghanis they capture on the mountain.

One could believe that these fighting men, trained to deal with just about any circumstances refused to deal with the consequences of killing their captives.

In contemplating this, and what would I do, I was reminded of a scene in the film The Bourne Legacy.

“You know what we are…we are the sin-eaters.”

Byers goes on to explain that his team is the grotesque group that must exists, but nobody wants to know exists. It is their job to eat sin, so that other Americans don’t have to.

The Navy SEAL heroes who were part of Operation Redwing, and depicted in the film Lone Survivor should have killed those captives, pure and simple. If my choice was coming home to the people I love and the country I cherish…BOOM you are DEAD. I wouldn’t lose a moment of sleep over it, so I guess that makes me a sin-eater.

As Luttrell theorized, it is likely because they didn’t eat that sin, that his team mates, best friends and brothers died. I would have felt no different about our warrior heroes had they killed those captives.

And you can bet, if they weren’t second-guessing Liberals in American who have NO idea what it means to be put in harm’s way, those SEALs would likely all be safely back in the warm bosom of America.

You send warriors to do whatever is necessary to survive and win. There is no HIGH ROAD in war, unless you just like losing. If that makes me callous, then so be it.

I know that there are many who appreciate the sin-eaters, as they sip their cocktails, then sleep comfortably at night.