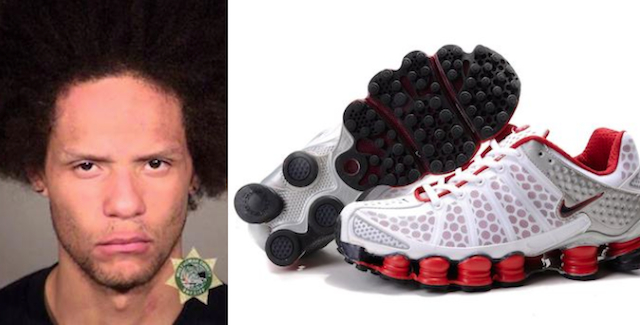 If I told you a pimp was suing Nike, would you think it was Jesse Jackson?

If Jackson had his way, Nike would manufacture Nike Pimps and would be the man behind them.

In this case, the pimp is a not well-known, chili-pimping “Reverend” Jackson, but the cultural iconic pimp of the Liberal black community. The “man” who believes he should exploit women for his own benefit, and who then lives off the booty, so to speak.

According to NBC News,

A Portland pimp is suing Nike for not placing a warning label in their shoes specifying that they could be used as a dangerous weapon — after he was sentenced to 100 years in prison for brutally beating a john with his sneaker.

Sirgiorgiro Clardy, 26, claims Nike should have placed a warning in the shoes warning consumers that the kicks have the potential to be used as a dangerous weapon, according to The Oregonian newspaper. Clardy is seeking $100 million for what he believes was the shoe manufacturer’s oversight.

This makes about as much sense as the gun control nuts saying that GUNS are the reason people are killed. Who knows how many people have been killed by Nike! I think Congress should convene a commission to look into this. I’d be willing to bet that some money-grabbing Liberal will find out that Nike is ripe for the picking.

Have you ever asked yourself this question: How many people are killed each year wearing Nike’s? Heart attack? Perhaps not. They could have been wearing pimp-brand Nike’s, yet Big Tobacco was blamed.

Hit by a car? Sure, but the deceased was wearing Nike’s while running at night. The shoes were reflective, but so what. Those Nike’s are potential killers. But let’s blame Big Oil for fueling that car that hit that runner. It certainly was not the fault of the drunk driver.

Those Nikes beat the “john” so badly that he required plastic surgery. And Nikes must be misogynists, as the prostitute was beaten so bad by the shoes that she bled from her ears.

Conclusion: Nikes are a menace to society.