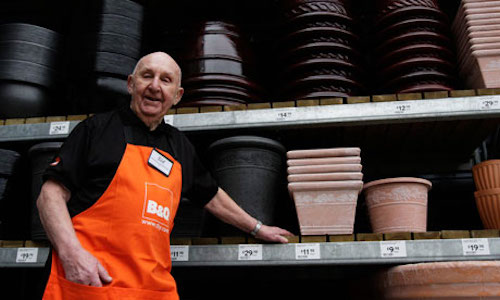 In the old days, the old were happy to leave the young with something better, even old Leftists. But those days are gone.

In the Era of Me, everybody is just trying to survive. The Left has created a world where it’s everybody for himself and God for us all. Selfishness has replaced selflessness because of the need to survive.

It turns out, because of America’s new Fuhrer, older people are hesitant to retire, thus, compounding the problems of unemployment among youth. Why pay for the young and stupid, when you can get the old and experienced at a discounted price?

The “lump of labor” theory offers that if a group enters the labor market — or in this case, remains in it beyond their normal retirement date — others will be unable to gain employment or will have their hours cut.

One can argue against this theory, since it is possible to expand an economy, as was done during times of war. Economic expansion occurs when countries innovate, as the U.S. did during the industrial revolution, and at other times in American history.

However, in the Era of Obama, the only innovation that has occurred is in how to lie to the American people about the lack of innovation, i.e. expanding the government. Obamacare is one such expansion.

The interesting development is, the people Obama most needs to prop up Obamacare, are youths who can’t get jobs to afford to pay for the “insurance.” Ironically, this leaves only the people Obama wants least on his new legacy-destroying legislation.

Bernanke wrongly predicts a better economy in 2014, because he is part of the ruse to try to make Americans feel better about their realities … realities that have very little prospect to improve in 2014. The government must keep telling itself that things will get better, and hope to convince the minions of the same.

However, the truth is that Obama, by way of Obamacare and other idiotic leftist policies, has put the U.S. on a trajectory that won’t have youth working anytime soon.

One of the potential fixes is completely antithetical to Big Government, and that is to lower the age for people to begin getting social security. This would at least give older workers some incentive to stop working.

But the government can’t reverse course with social security by giving people their money back early, and allowing people to perhaps FIND happiness, versus simply pursuing it. The objective of social security is to keep the money for the Fed.

Liberal policies and ObamaCare may actually have youth voting for Conservatives sooner than most would have predicted.

That’s a potential SNAFU that Liberals certainly didn’t count on.