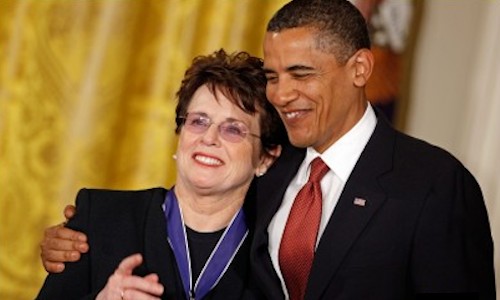 The homosexual lobby, and the Left in general, are praising President Obama for his sending Billie Jean King to Russia for the Winter Olympics instead of him going himself.

Putin is under fire for cracking down on homosexual athletes ahead of the games and Obama’s sending of King, who is a lesbian, is supposed to convey a message to Putin. I think it actually does send a message, but not the message that the fawning Left wants to hear.

Let’s not forget, Obama is still smarting from Putin handing him his lunch on Syria. After talking tough and preparing for unilateral military action to uphold his “red line,” Obama backed down and Putin swooped in and “saved the day,” making Obama look like a spineless worm.

Obama is an expert at using public policy to avenge his frail ego. During the government “shutdown,” he personally made sure that the public suffered during a menial ordeal they would have otherwise not have noticed. He wanted the “shutdown” to hurt so the American people would grant him license to continue spending the country into insolvency.

And now, he’s out sending homosexual athletes to Russia as a middle finger to Putin.

Mark my words, this is an act of spite and vengeance. Obama loves exacting revenge. Remember, he’s from Chicago…