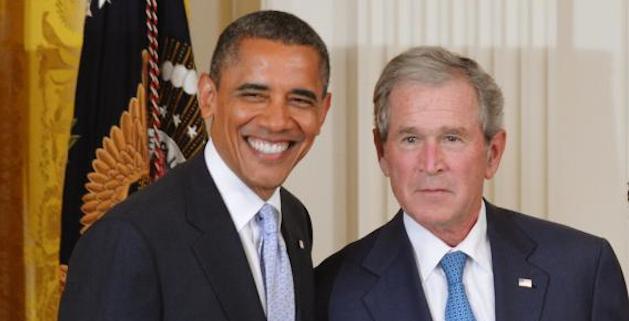 In what has to be a horror to Leftist worshipers of Barack Obama, I have confirmed that Obama is the offspring of George W. Bush.

Obama has ushered in the 3rd and 4th terms of George W. Bush, and this vexes the Liberals. So they tell us the reason why Obama couldn’t accomplish anything is because of the Republicans, Republicans are intentionally sabotaging Obama. Republicans hate Obama…so we are told.

It certainly can’t be the fault of Liberals who believed Obama to be the smartest president ever, only to find out that they backed a moron.

Worse yet for Liberals’ sensibilities is that their MESSIAH is following the very same programs of the man Liberals said was the dumbest president EVER.

Well if Bush was so dumb, then what is Obama?

Obama has added to his daddy’s debt, maintained GITMO, extended the wars, continues to bail out all the “Bigs,” auto, financial, and government. And as the NY Times points out, Obama has gone from critic to overseer of the spying programs.

You can’t have your cake and eat it too, Liberals. Your guy makes Bush look like a Rhodes Scholar.