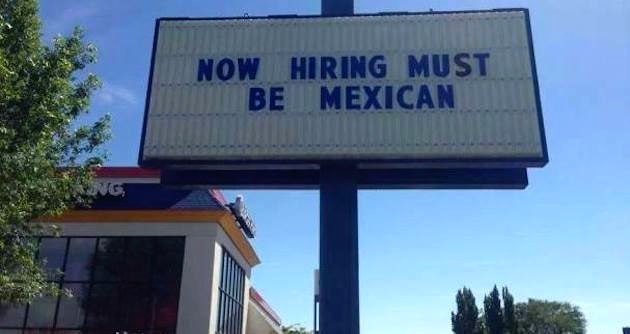 Leftists can’t have their cakes and eat it too, when it comes to Mexicans. Or Burger King.

A Burger King in Ephrata, Washington is making national news after this photo was shared widely across Facebook recently. As far as this non-Mexican, black man of American and Human descent is concerned, anybody who complains about this sign is just a pansy-ass conformist.

So what Burger King has an affinity for Mexicans. The Left have no complaints when farmers used Mexicans to harvest crops.

On the heels of the fast-food workers complaining about salaries, you’d think they would have anticipated this reaction. This is a tribute to the work ethic of Mexicans: they are willing to do the work that Americans will not. The same was true of blacks, back in the day.

Further, because of Liberals like Elizabeth “Fauxcahontas” Warren, ethnicity is interchangeable…so these days anybody can be Mexican.

Here’s how to qualify:

See. It’s just not that difficult.

For all we know, this Burger King was issued an ultimatum by the Fed to FIND SOME MEXICANS OR ELSE! Maybe that Burger King needed Mexicans to pick out the proper produce, placing lettuce, tomatoes, and onions on the burgers, not to mention the salads.