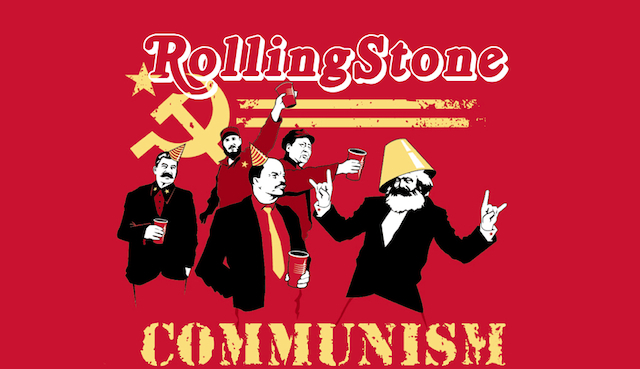 Talk about a magazine written by a group of drug-crazed knuckleheads. I’d rather stare directly at the sun with binoculars, than read their drivel.

Their latest article on “Five economic reforms millennials should be fighting for” is emblematic of a couple of things. First, don’t end titles (or sentences) with prepositions…yes, the writing sucks. And second, why don’t they just incorporate in Moscow?

In the communist manifesto they call an article, the first thing they say millennials should have are jobs. 100 percent employment for the kids who are lazy, know-nothings who want $25 an hour minimum, so they can practice guitar in the break room. Guaranteed jobs!

Life should be so nice. By the way, it has been tried in places like the USSR, and other communist countries. I don’t think “minimum wage” was discussed, however.

Here is my advice for millennials: create your OWN jobs, and stop relying on others, you lazy bastards! Listening to Rolling Stone’s advice on politics is like wiping your butt with your hands then heading back to finish that burger.

Next, they want social security for all.

Hell, you can’t even guarantee yourself “personal” security, so how does one get social security. Yet again the commies want us all to feel that we are secure, social or otherwise. I’d like them to make sure that my car is more secure, given that it’s been broken into four times…so far. Can I get some “auto security?”

For more on the communist manifesto and how to ride the gravy train on biscuit wheels, read more here.

Rolling Stone does want to protect their lunacy, as this video shows