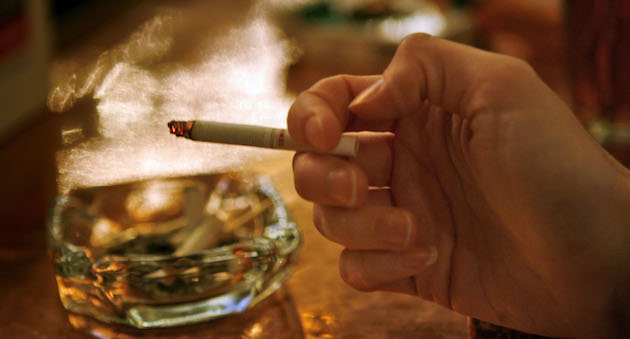 The government sanctioned the drug of nicotine, as well as corporate greed by the tobacco companies spiking their products with the addictive chemical.

The product is so addictive in fact, that even the Liberals’ messiah can’t resist.

Allowing smoking all this time gives a whole new meaning to disregarding the government’s responsibility to protect citizens from enemies foreign and domestic. It just goes to show you that as long as there is money to be made, the government is willing to put a price on our heads. The profit factor explains why Big Tobacco has been able to buy its way out of being considered a domestic terrorist.

The government’s out: 50 years ago, they made those mean-spirited Big Tobacco capitalists give us warnings on cigarettes. And for the last 50 years, the government has continued to “protect” us from the hazards of smoking, by placing those warning labels on cigarette packs. Oh…and collecting their extortion payments from Big Tobacco.

Liberals legislate everything against cigarettes, to the point that you can practically only smoke in the privacy of your own home. Liberals preach about how much smoking costs us because of heart disease, emphysema, and lung cancer. Smoking remains the No. 2 cause of preventable death in the United States, and has been for decades, second only to abortion.

Smoking kills more people than obesity, substance abuse, infectious disease, firearms, and traffic accidents, according to the CDC. Some 443,000 Americans die from smoking-related illnesses every year, according to the U.S. Department of Health. Can you imagine what insurance premiums would be if smoking were outlawed.

If Liberals were serious about healthcare, they would outlaw smoking. With ObamaCare, non-smokers are footing the cost in increased premiums as well as carrying the brunt of healthcare cost, because of smokers.

Knowing the effects of smoking on the health and pocketbooks of Americans, Liberals won’t give up the revenue from smoking plants, and in fact are upping the ante in some states by allowing pot smoking.

Liberals argue that pot is medicinal. I wonder if pot will be required to have a warning label as well?

The man who fought for a renewed healthcare system made no provision for outlawing the number 2 killer of Americans, and is an avowed pot smoker. Ain’t that something.