A judge ruled recently that William Marotta must pay child support for being a sperm donor over 5 years ago.

When Marotta donated his sperm, he waived his parental rights, and thought he had done his part, by the letter of the law.

Marotta said that he was helping out a Lesbian couple, when he made the donation, and once the ladies separated and the “baby mama Lesbian” lost her job, all best were off.

File this story in the “No good deed goes unpunished” category, as Marotta was contacted by the state, once the “baby mama Lesbian” decided she needed a sugar daddy, and now Marotta has been ordered to “baby daddy” to a child he never wanted, and “fathered” as a favor to these Lesbians.

It’s one thing to pay child support for a kid you actually fathered in a relationship with a spouse (or girlfriend). But to have to pay a person with whom you have no carnal knowledge is just scandalous. 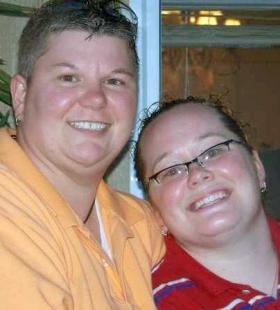 And it’s not as if these two were Victoria’s Secret models, so Marotta doesn’t even get bragging rights.  Not saying that Marotta is Brad Pitt or anything, but look at these two so-called friends who requested his seed.

I’m not one to throw rocks, but I think we can all agree that their prospects may have been a bit limited.

I’m not sure if this is “Lesbian-gone-rogue” or the state arbitrarily targeting this “good-spermaritan.” Regardless, it’s not the way things should work.

Not to mention, this story showcases why the “NOT Gay” have a reason to dislike the LGBT community. They use the NGMW (not gay man woman) and then saddle us with the bill.

To find out more about all the Liberals involved in this story, go here…