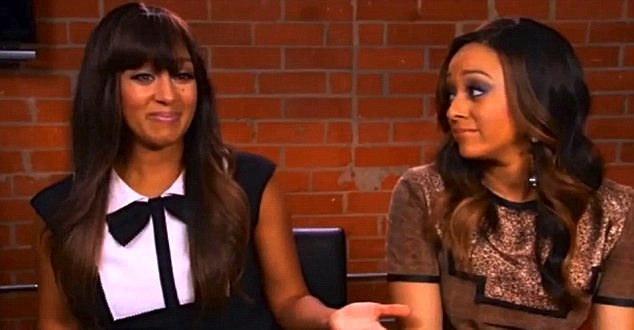 Tamera Mowry, with identical twin sister Tia by her side, opened up to a painful reality in an interview with Oprah: she is the object of hatred simply because she married a white man.

Tamera and Tia, beautiful actresses known for their ebullient spirits, and who happen to be Christian women, talked freely about about their lives and marriages, and the backlash to their marriage choices.

What is most interesting is that the hate and vitriol seems to be from that Leftist sector of society that worships at the alter of “tolerance!”

“But people choose to look past love and spew hate! That’s what hurts me, because I’ve never experienced so much hate.

I get called white man’s whore…back in the day, you cost three hundred dollars, but now you’re giving it to him for free.”

The very sad thing is, this vitriol from the left is NOT unusual, but commonplace. Why aren’t more people aware of the intolerance of the Left?

Think people. Who are the mouthpieces? What organizations control, for the most part, the messaging the average American receives?

You got it. Main Stream Media, aka MSM.

I have a dream that my four little children will one day live in a nation where they will not be judged by the color of their skin, but by the content of their character.

Tamera Mowry should be commended for walking the talk of the Christian faith, for judging by content of character, not outward appearance.

Actress Tamera Mowry, who is black, wept in an interview with Oprah Winfrey over the vile bigotry she has encountered because of her marriage to Fox News reporter Adam Housley, who is white.

Let’s face it: Mowry’s sin, in the view of her feckless detractors, is not merely that she married outside her race. It’s also that she is so open about her love for a white man who — gasp! — works for reviled Fox News.

Neither of them is political, but the mere association with Bad Things (Fox, conservatives, capitalism, the tea party, Christian activism, traditional values) is an invitation for unabashed hate.

Somehow, conservatives must bypass MSM and awaken folks to the message of real tolerance: throwing race out of the equation. We are Americans…at least those of us in the United States legally.

And even more important, we are God’s handiwork…each of us intrinsically valuable. That value has nothing to doing with our accomplishments, our skin color, or our politics.

Rather, like the great value of a Stradivarius violin, each of us have great worth because of our Creator.

“Your faith in God, in family and in life never cease to amaze me,” Tamera revealed on her personal website. “You’ve taught me to set my priorities straight 1) God 2) Family 3) Work.”

The Left, the “Politically Correct,” are dead wrong: Tamera and Tia do NOT deserve disdain.

What is the chief aim of man? Man’s chief end is to glorify God, and to enjoy him for ever.