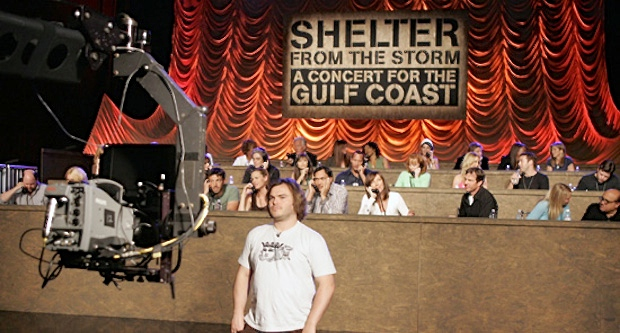 Hurricane Katrina brought devastation to New Orleans, a city that is home to over 300,000 people. And the Hollywood knee-jerk reaction was…Telethon!

For weeks there was much weeping and gnashing of teeth, hysterical news anchors, and disturbing images of suffering people on rooftops and crammed into the Louisiana Superdome.

As the sympathy and the drama wore on, the usual Hollywood-hosted telethons began to pop up.
The supposed focus of the fundraisers was to subsidize relief efforts. What they predictably turned into were showcases for rich liberals to prove again that they cared more than anyone else about poor minorities.

The added benefit was that the calamity was brimming with opportunity to criticize G. W. Bush and accuse a man whose efforts have helped save millions of lives from AIDS in Africa of not “car[ing] about black people.”

The most prominent event was Shelter from the Storm, which was telecast on six major networks.

Obama sycophant Chris Rock was there too, declaring that “George Bush hates midgets.”

In addition, there was also SOS Saving OurSelves and the BET Relief Telethon, where Chris Rock showed up again and clarified that in addition to midgets, GW also hates “albinos.” There was even a telephone call from America’s first “black” president/attention hound Bill Clinton and film clips of Katrina victims pleading for help.

Alicia Keys reappeared at BET and was joined by “very happy” Obama inauguration attendee Patti LaBelle, the Pretenders featuring “I’m so glad he won” Chrissie Hynde, and Jay-Z and Diddy who, compliments of the NYC hip-hop community, presented a $1 million check to the Red Cross.

There were other fundraising efforts on MTV, VH1 and CMT. Music was provided by such acts as Green “Get Out and Vote!! And Vote for Obama!” Day, the Rolling Stones led by Obama supporter Mick Jagger, Mr. Gwyneth Paltrow, aka Chris Martin, and his band Coldplay, Elton John, the Foo Fighters, Fiona Apple, John Mellencamp, Kelly Clarkson, and Pearl Jam, all of whom, without exception, went on after Katrina to strongly endorse Barack Obama!

That recitation of Obamaficianado Katrina efforts was necessary to point out the hypocritical duplicity of the supposedly empathetic left.

If it were really the lives of innocent people that liberal entertainers were concerned about, they’d now be speaking out on behalf of all the cancer victims, some of whom are small children, who’ve lost their health insurance because of Barack Obama’s failed legislation.

Hurricane Katrina impacted 300,000 victims, 1,833 of which were storm-related deaths. Obamacare stands to bear down on 300 million lives, and has already negatively affected five million individuals who’ve had their insurance plans cancelled against their will.

In due time the body count will begin to rise, yet to date there’s not been one single announcement from the Hollywood elite or the music industry about plans to hold a fundraising telethon on behalf of Obamacare victims, and that’s because this time, the president responsible for the disaster is someone liberals admire and support.

In the wake of Katrina, People Magazine’s “Sexiest Man Alive,” Adam Levine of Maroon 5 and “The Voice,” said that “it was particularly upsetting to watch [New Orleans] crumble.”

Eight years later, Adam has been recruited by the Obama administration to nudge hesitant Americans to surrender to the inevitable by signing up for the president’s dreadful healthcare plan.

Any celebrity who boo-hooed over Katrina that is now attempting to inspire Americans to sign up for Obamacare, even if it’s the “Sexiest Man Alive,” might as well be purposely gathering up and bussing millions of Americans toward the swollen levees of the Big Easy, knowing full well that Katrina is churning toward the shore.

A question for the benefit-concert beggars: Aren’t Obamacare victims also just innocent folks affected by a force of nature too powerful to stand against?

What’s clear is that the concern exhibited by the usual ‘compassionate’ celebrities is now non-existent, because the source of the tragedy this time around is not an act of God, but the act of a man who thinks he is God.