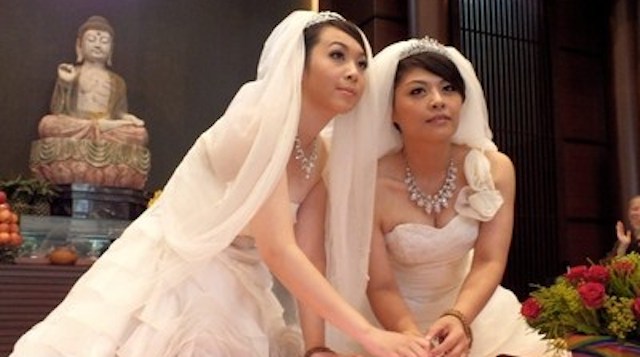 Holy Dick Cheney, Batman, how much would you pay to keep your kid from being gay?

America’s Leftists say that Conservatives and Republicans have a problem with the LGBT community? Perhaps, but we certainly wouldn’t pay to convert them.

But that’s what Hong Kong billionaire Cecil Chao is attempting with his daughter. Chao is willing to pay $130 million to any man who can turn his daughter around.

That’s a lot of coin to get his daughter to give up her “liquor” license. DANG!

As a proud member and spokesperson of the “Not Gay Man Woman” (NGMW) community, I say with confidence that we have no intention of paying to convert any member of the LGBT.

There’s a catch. Chao’s daughter is married. And yes…to a woman, in case you missed the earlier hints.

It seems the original price for a Lesbian exorcism was $65 million, which Chao offered in September of 2012. Apparently $65 million was not enough, so Chao doubled the offer, and got over 20,000 responses.

It’s good to know that $130 million is the going price for such services, about what it will take to survive the Obama economy in 2016.

“But obviously I would, from my point of view, prefer her to be married and to have grandchildren,” Chao said.

Now the offer is doubled after the first one reportedly attracted 20,000 unsuccessful potential husbands.

Chao told the Malaysian newspaper Nanyang Siang Pau that she doubts her father’s offer will be able to produce a man that she finds attractive.

However, she said she’d be “happy to befriend any man willing to donate huge amounts of money to my charity Faith in Love, provided they don’t mind that I already have a wife.”

“Third and lastly, thank you Daddy, I love you too,” she added.