In 2012, the city of Omaha unfathomably accounted for nearly 80% of Nebraska’s homicides.

Over the years, that harrowing statistic has remained consistent, with most of the murders disproportionately occurring in north Omaha, which is primarily Black.

Although Blacks are only 13.7% of Omaha’s population, Omaha.com reported:

“[O]maha’s streets in recent years have become among the deadliest places in America for blacks.  Fueled by gun violence in northeast Omaha, Nebraska has the third-highest black homicide rate in the nation, according to the latest compilation of detailed national homicide statistics.”

This bloody trend dominates America’s urban landscapes because the natives interpret murder and mayhem as “keepin’ it real.” I thoroughly dissect the warped mindset that plagues Black communities in my book, “The Un-Civil War: Blacks vs Ni**ers.”

In the hood, “keepin’ it real” isn’t just a phrase… it’s an encouraged lifestyle. In fact, the hood would religiously practice Kwanzaa if Kwanzaa’s tenets were based on “keepin’ it real.”

When Omaha’s police chief, Todd Schmaderer, was asked to speculate on why an overwhelming majority of Nebraska’s homicides were clustered in north Omaha, he responded:

“I don’t see what purpose that serves.”

In other words, political correctness trumped public safety. The Grievance Industry would be proud of him.

Fortunately, the recent action of the Omaha Police Officers Association demonstrates that (unlike their police chief) they know why Omaha’s violence is concentrated in certain areas. The violence is undeniably linked to thug culture. To prove said point about the violence, and create an honest dialogue, the OPOA posted a controversial video onto their website that was taken from a local gangbanger’s Facebook page.

In response to the posting, police chief Schmaderer issued a statement saying:

“I strongly disagree with any postings that may cause a divide in our community or an obstacle to police community relations.”

The OPOA explained their intent for posting the video:

“We here at OmahaPOA.com viewed the video and we knew that despite the fact that it is sickening, heartbreaking footage, we have an obligation to share it to continue to educate the law abiding public about the terrible cycle of violence and thuggery that some young innocent children find themselves helplessly trapped in.” 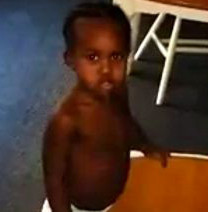 The “sickening, heartbreaking footage” showed a diaper-wearing, Black toddler being instructed by a male and female caregiver (believed to be relatives) to use profanities and thug gestures for their entertainment.

At one point in the almost minute and a half video, the female tells the child to flip his middle finger at the male and say, “suck my d**k.” Not to be outdone, the male then tells the toddler to say, “I need some pu**y today, I’m throwing a fit right now.”

Sadly, instead of being potty-trained, the toddler was learning to be potty-mouthed. Excessive vulgarity is another tenet of “keepin’ it real,” and apparently, “keepin’ it real” is so easy, that even a toddler can do it.

One doesn’t have to be a fortune teller to foresee that social workers, law enforcement, public defenders, and probation/parole officers will be mainstays in this child’s life (at taxpayers’ expense).

As for the gangbanger who created the video, he posted a nonsensical rant on OPOA’s Facebook page, which took aim at those advocating for the child.

“Man f**k all of yall because the matter of the fact is you act like we was giving that little boy weed or we have a gun in his hand or something b*tch no! but I put you’re a** in an orphanage don’t ever talk on my f**kin cousin move around with that sh*t I don’t give a f**k about you , the police or these mother**kers leaving comments on this mother**ker so therefore all yall can suck my d**k nigga!”

The timely footage provided an unadulterated glimpse into the dysfunctional world of a criminally-prone subculture whose identity is intentionally based on anti-social behaviors.

Unsurprisingly, the sympathizers, apologists, and deniers are upset with the Omaha Police Officers Association for daring to highlight the subculture’s destructive impact.

The misplaced anger of the sympathizers, apologists, and deniers simply means that the OPOA is onto something.

Editor’s note: Taleeb has a gift for finding these heart-breaking stories and communicating the dire need for help, perhaps revival in this inner-city, thug culture. The video is breath-taking in its juxtaposition of a toddler and gang-bangers. How amazingly sad. This child is learning obscene language when he should be learning to sing, “Jesus loves me, this I know, for the Bible tells me so.”