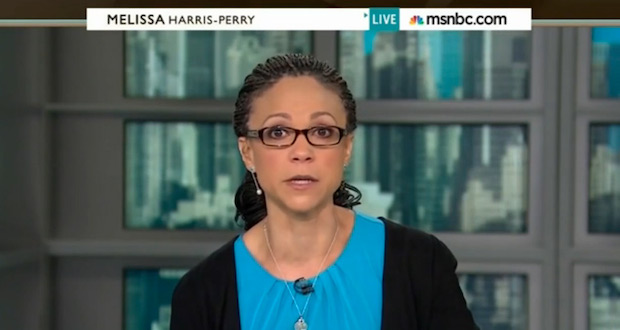 What do you call those who believe their worst suppositions about other people based on race, religion or politics? – Prejudiced.

What do you call a network, or political party, that trades in prejudice? – Corrupt, is the word that comes to mind.

Melissa Harris-Perry mocked Mitt Romney over the adoption of a black child. That is prejudice. She felt normal carrying on like this at MSNBC. That is corruption – a culture of corruption.

You may disagree with Mitt Romney politically, but you will seldom meet a finer, more gracious man. As you’d expect, Mitt publicly forgave MHP.

When have you ever heard of a leftist forgiving a conservative? The whole point of impugning conservatives is to not forgive them – it’s to gain a political advantage by prejudicing people against them.

And I would not forgive Melissa Harris-Perry. Rather, in the spirit of Leftist dogma, I would exonerate her. Exonerate her? Let me explain …

Leftists blame the “environment,” or “culture” for the misdeeds of individuals. They always wonder what “we,” can do to prevent people from making disagreeable personal choices. They don’t believe that people are ultimately responsible for their own behavior. They don’t believe in free will…