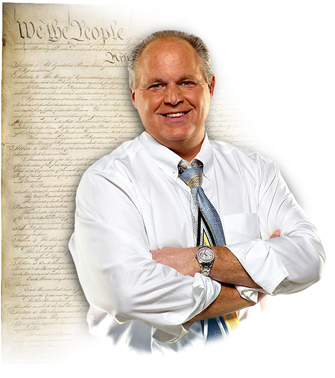 In 1996 future Minnesota Senator Al Franken (aka Stuart Smalley) wrote a book entitled “Rush Limbaugh is a Big Fat Idiot and other Observations.”

Chris Matthews of MSNBC said that conservative talk show host Limbaugh reminded him more of the “guy from Deliverance.”

Liberals feel contempt for Rush Limbaugh, which is why they mock him and corporately celebrate his personal struggles every chance they get. Yet, for the joke that the left portrays Maha-Rushi to be, when they need a scapegoat, it’s Limbaugh that influential politicians accuse of affecting their lives and agendas for the worse.

Prior to the 2012 election, after the fiasco that was his first term, Barack Obama blamed the Republicans for all his failures. Obama said that if Republicans weren’t worried about what the “big fat idiot” everyone laughs at would say on the radio, Republicans would have gladly helped advance his impeccable “Hope and Change” policy agenda.

Recently the guy behind the Golden EIB Microphone was blamed again for undermining the man trying desperately but failing miserably to be an effective leader, and for causing the Republican base to constrain otherwise cooperative politicians from supporting his current political agenda.

Not only that, but according to Obama, Rush singlehandedly had the influence to transform the president’s sterling image into a cartoonish “caricature.”

And then there was the woman whose claim to fame is standing in pink sneakers for 11 hours on behalf of late-term abortion.

In order to win over low-information observers, Texas state senator Wendy Davis couldn’t resist employing the liberal tactic of promoting herself in a way that has nothing to do with the truth. Then, when she got nabbed for embellishing her single-mother-trailer-park story for political purposes, rather than fessing up she blamed…you guessed it – Rush Limbaugh.

After the self-aggrandizing Davis proved she couldn’t salvage her damaged reputation, Johanson ended the email by referencing an old standby when she said, “I guess Rush Limbaugh just couldn’t help himself.”

Rush Limbaugh? What does Rush Limbaugh have to do with Wendy Davis using Barack Obama’s fake background ploy and trying to pass herself off as something she isn’t?

So it has to be one or the other. Either the man they call the “Big Fat Idiot” is big and fat in the power department and can sway the fortunes of the President of the United States and a woman supposedly on the brink of what  Obama called “something special happening” …

Or it’s not Rush Limbaugh who’s the “Big Fat Idiot.”