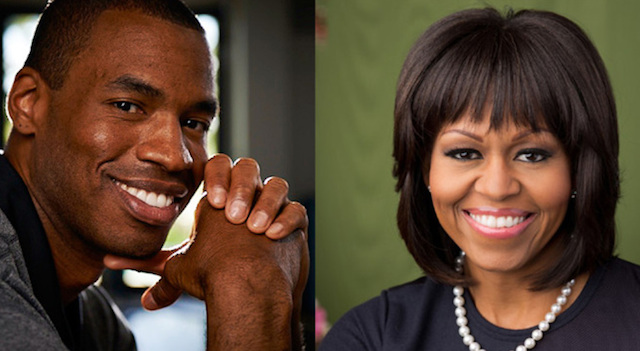 Tonight at the SOTU Jason Collins, the openly gay professional basketball player representing the LGBT community, will be out of the closet but in the Sky Box with FLOTUS.

When Obama says over and over “regardless of who you love,” liberals on the floor can look up at Jason when they cheer.

Also in a SOTU Special People SkyBox seat of honor will be survivors of the Boston Marathon bombing Carlos Arredondo and Jeff Bauman, Gary Bird, a fire chief from Moore, Oklahoma, which was hit by a tornado last year.   Also on hand will  be young Joey Hudy, a 16-year-old entrepreneur and intern at Intel, whose parents are definitely Obama supporters, as well as, on behalf of teacher’s unions, District of Columbia Public Schools’ Teacher of the Year, Kathy Hollowell-Makle.

Representing the glass ceiling shatterers, waving from the balcony like Marie Antoinette’s handmaiden will be GM CEO Mary Barra. Mary will sit right beside Marie…I mean Michelle Obama, and if we’re lucky we may even see Ms. Barra adjust Mrs. Obama’s tiara and train.

It’s unclear whether, as part of the proceedings,  there will be a same-sex wedding or whether Beyonce and Jay-Z will be sharing some steamy skin.

Either way, what would be fun is if, up there in the ‘SOTU Special People SkyBox,’ there were individuals that could ensure that Barack Obama would be so anxious  to get out of there he would only punish America for a short amount of time.

Right now, we already know Willie Robertson of Duck Dynasty is coming as a guest of Louisiana Rep. Vance McAllister, and conservative talk show host Sean Hannity will be sitting with Rep. Louie Gohmert of Texas.

While Willie and Sean should get Barry stuttering a bit and could help speed up the torture, wouldn’t it be fun if, in full camouflage regalia, Phil Robertson showed up on behalf of traditional marriage?

Or how about that blonde Danish chick that took a selfie with Barry at Mandela’s funeral? Barack Obama would likely be in agreement that the fetching Helle Thorning-Schmidt could certainly represent Apple technology.

Rush Limbaugh, Principal of the Limbaugh Institute for Advanced Conservative Studies could be there on behalf of education.

And, last but not least, the Tea Party Three:  Mike Lee (R-UT), Ted Cruz (R-TX), and Rand Paul (R-KY) could give a shout-out for freedom!