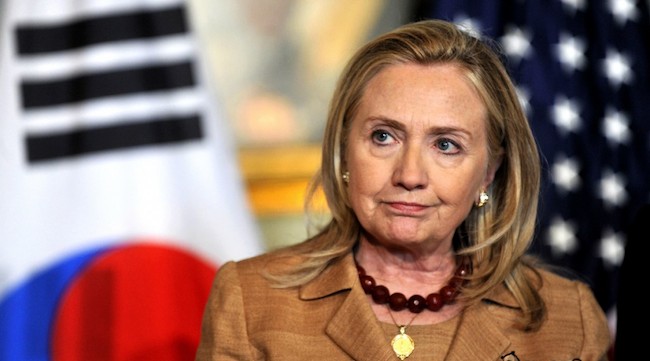 Clinton is so globally famous, so politically wired and so primed for the presidency after two campaigns at her husband’s side and one epic race of her own that her life as a private citizen has become virtually indistinguishable from her life as a candidate.

Right now, twenty-four months before the Iowa primary, and at a point when not a single serious candidate has declared that she or he is running for President, Priorities USA, the Democratic Super PAC that raised and spent wads of cash in support of President Obama’s 2012 re-election campaign, is putting its money and expertise behind—you guessed it—Hillary Clinton.

While all these elite wonks and writers scurry to anoint Hill and pen the fait accompli, I would like to continue my quest to inform Americans, to remind us what’s behind the celebrated veneer of Ms. Clinton.

I don’t expect the GOP to highlight any Hillary Clinton history EXCEPT her titanic failure as Sec State: 4 brave Americans died in Benghazi, under Clinton’s watch, and she is culpable.

As for the rest of her questionable life story? Well, that’s where new media can pick up the brush and paint in the rest of the picture.

Hillary and Bill Clinton are pursuing their goal for ever more power with the relentless abandon and iron will of an Olympic athlete. But unlike the Olympic sporting amateurs, Hill and Bill are pros: they seem to get what they want, no matter the cost.

Take a look at the next 10 people in this series who met with an untimely death. And again, I do NOT assert a direct link between the Clintons and the deaths.

However, use common sense. Use the science of probability. And ask yourself how likely is it that an average person would have this number of folks, in their close circle of acquaintance, die mysteriously or be the victim of a hit-style murder.

Mr. KENNEDY. Mr. President, the tragic plane crash in Croatia last month that took the life of Secretary of Commerce Ron Brown also took the lives of other outstanding officials in the Department of Commerce, including Charles F. Meissner, who was Assistant Secretary for International Economic Policy and who was also the husband of Doris Meissner, the Commissioner of the Immigration and Naturalization Service. During the 1970’s, he had served with great distinction for several years on the staff of the Senate Foreign Relations Committee.